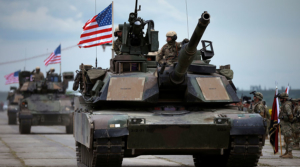 The Department of Defense (DOD) will spend $572 million to train U.S. Army soldiers to fight underground in places such as sewers and railway systems under dense urban areas around the world.

New equipment and training will enable soldiers to fight in complete darkness, with bad air and lack of cover from enemy fire.

“… we have to look at ourselves and say ‘ok, how does our current set of equipment and our tactics stack up?'” said Col. Townley Hedrick, commandant of the Infantry School at the Army’s Maneuver Center of Excellence at Fort Benning, Georgia

It is estimated that there are about 10,000 large-scale underground military facilities around the world that are intended to serve as subterranean cities.

According to a new training guide, North Korean leader Kim Jong Un can move up to 30,000 troops an hour through a network of deep tunnels under the border into South Korea. He is also said to have subterranean nuclear missile facilities, as well as “a regimental air base [built] into a granite mountain.”

Training is only one aspect of the operation effort. Much of the budget will go towards new equipment.

The Army is looking at the handheld MPU-5 smart radio, with a price tag of $10,000/unit, that will allow units to talk to each other and to the surface as well. The troops will also need self-contained breathing equipment, which could cost as much as $13,000 each. Hand-carried ballistic shields will provide cover from enemy fire. And of course, in total darkness, troops will need enhanced night vision goggles.

Why Did The Pentagon Quietly Make a Major Change to its Mission Statement? Doctor Hired by VA Charged with Sexually Assaulting Female Patients Scroll to top
Follow a manual added link