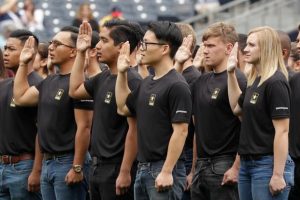 For the First Time Since 2005, Army Misses Recruiting Goal

The Army fell short of its recruiting goal for 2018, missing its mark for the first time since 2005.

The Army has been looking to grow its force strength in the face of growing threats from competing world powers such as Russia and China. The service branch has fallen short by about 6,500 soldiers, despite an extra $200 million spent on bonuses and approving some additional waivers for bad conduct or health issues.

Army leaders said they signed up about 70,000 new active duty recruits in the fiscal year that ended September 30.  The Navy, Air Force and Marine Corps all met their recruiting goals for 2018.

Despite the shortfall, Maj. Gen. Joe Calloway, the Army’s military personnel management director, said the 70,000 recruits who did enlist this year is the most the service has attracted since 2010. He said the Army chose to focus on taking in high-quality recruits instead of ensuring it met its goal with borderline applicants.

Calloway believes the Army’s shortfall was due to the strong American economy and increased competition from private sector employers who can pay more.

Only about 30 percent of 17- to 24-year-olds can meet the mandatory requirements for consideration for military service, which consists of a combination of physical, mental and background attributes. Additionally, only about 13 percent of that population is interested in military service, according to the Pentagon.

“We made a decision to raise the quality of our recruits despite the tough recruiting environment,” the Army said in a statement. “As we look to 2019 and beyond, we have laid the foundation to improve recruiting for the Army while maintaining an emphasis on quality over quantity.”

To keep up with changing times, the Army is adjusting its  recruiting efforts, including a new focus on reaching potential recruits through social media and interactive gaming, and in locations where recruiting has typically been weak, such as major metropolitan areas.