Military Blog
You are here: Home1 / Woman Who Inspired “Rosie the Riveter” Dies 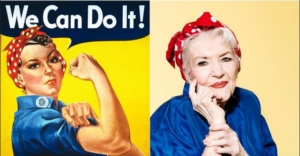