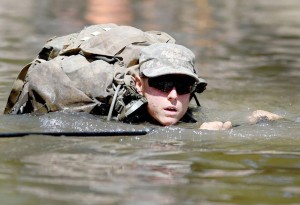 The US Army continues to assure that the most qualified individuals are assigned to any given military position; individuals, meaning no distinction between male or female military personnel. The Army Ranger School is no longer an exception to this guideline.

Two female West Point graduates are advancing to the final phase, vying to earn the US Army Ranger tab. Staff Sgt. Gregory Space, and instructor assigned to the 5th Ranger Training Battalion at Camp Merrill, GA, assures that there are no compromises made for the female trainees because of their sex. Despite critics who may doubt that the standards are equal, Space offered the following assurance:

“I would tell them I was there, and I was one of the ones upholding those standards,” he said. “And I will be able to honestly tell them that.”

Among the first women to graduate from West Point Military Academy is Sue Fulton, now the chair of the West Point Board of Visitors, who reports directly to the President of the United States. Fulton concurs that women are being tested on how capable they are in leadership, in being tenacious and overcoming obstacles. The fact that they all are graduates of the United States Military Academy is evidence of their determination to take on any challenge.

“They are not going to give up, and that’s exactly what you want in a combat leader,” Fulton explained.

Nineteen women were among the original group who began the Ranger School in Ft. Benning, GA. Statistics show that only three percent of all soldiers qualify as Rangers, proving that this is not easily passed by any candidate. Of the original 19 women, eight passed the physical testing, then failed their patrol missions. This is not indicative of their sex in that 70 percent of all Ranger candidates experience a failed course and start the course over from the beginning, or “recycle” in the program.

“By accepting the Day 1 recycle, they absolutely validated their place here,” said Airborne and Ranger Training Brigade Command Sgt. Maj. Curtis Arnold. “This is tough, physically and mentally demanding training, and a soldier has to earn that Ranger tab. . . . What it said was they were here to earn it, that this was not a sideshow and there was not an agenda.”
Of the eight facing the option to recycle, five were dropped and three continued by starting over again. The remaining two female candidates successfully completed the 18-day Mountain Phase course. One woman and 60 men are being given an opportunity to recycle for a second try to successful complete the Mountain Phase.

The training will continue to the final phase in Florida; a 17-day extended platoon-level operation in a coastal swamp environment near Valparaiso. Those individuals who pass the final phase will graduate August 21st at Fort Benning, GA.