Military Blog
You are here: Home1 / Veterans and Homelessness 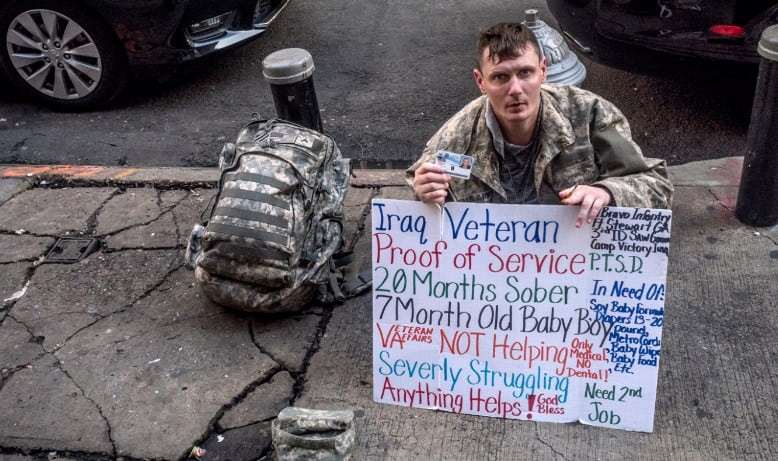 It is really a state that just shouldn’t exist. No human should be without a home – without shelter. Without a place to feel safe.

There are, however, certain groups that seem particularly intolerable when paired with the word “homeless.” One of those groups is Veterans.

We have all seem the images (like the one feature with this article) of a down trodden man in fatigues – tired, thin and dirty – with a homemade cardboard sign begging for help. Some of them are missing limbs. Some are in wheelchairs. Some struggle with PTSD. All share the common bond of having served our country to return home and live on the streets.

By now, we have all heard of the now infamous homeless Veteran and his “benefactors” who conspired to bilk GoFundMe contributors out of hundreds of thousands. Those images of homeless veterans are exactly why the GoFundMe scam was so instantaneously successful. The trio relied on the general public’s sympathetic response to seeing a homeless Vet so willing to turn over his “last” $20 to a stranger.

The most heartbreaking part of their tale is the damage it does to Veterans who are homeless and in actual need of assistance. While Homeless Veterans are of the utmost concern across the country, there are some areas in California that are getting federal assistance – to the tune of $5.3 million – to help those Veterans get back on their feet.

The federal dollars have been awarded to assorted HUD offices in the Bay Area and Central Valley in California and is expected to help 343 homeless Veterans find permanent housing and support services. Ben Carson, secretary of the US Department of Housing and Urban development has been quoted in a statement made October 4, 2018 as saying  “we have few responsibilities greater than making sure those who have sacrificed so much in service to their country have a home they can call their own. The housing vouchers awarded today ensure homeless veterans nationwide have access to affordable housing and the critical support services from the VA.”

The voucher funding has been awarded in a joint effort by the U.S. Department of Housing and Urban Development and the U.S. Department of Veteran Affairs and was made available by the HUD-Veteran Affairs Supportive Housing program, but it will be the VA facilities that will be evaluating each case to determine the needed level of support. The VA facilities in the area will be expected to report on the length of each homeless experience, the length of time without adequate housing as well as the amount of support that would be necessary to get them into permanent housing. There will be an extensive system of checks and balances before Veterans will be referred for vouchers.

Since the joint program launched in 2008, more than 150,000 homeless veterans have been assisted throughout the country. Additionally, more than 93,000 housing and services vouchers have been awarded. Veterans who participate in the voucher program typically rent privately owned residences and use 30% of their income or less to cover that rent each month.

The breakdown of funding by housing authority is below:

To Ink or Not To Ink…