Military Blog
You are here: Home / Military Blog / Government / US Flyover in S. Korea Seen as Show of Force 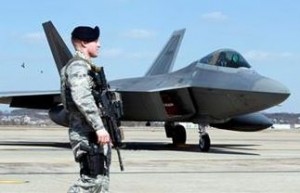 The U.S. military flew four of the most advanced fighter jets over South Korea in a clear show of force against North Korea

The high-tech, stealth F-22 planes landed at Osan Air Base after the flyover, escorted by other U.S. and South Korean fighter jets. The demonstration underscored the United States’ airpower that can be called upon to defend its ally, South Korea, from potential aggression from North Korea.

“The F-22 ‘Raptor’ is the most capable air superiority fighter in the world, and it represents one of many capabilities available for the defense of this great nation,” Lt. Gen. Terrence J. O’Shaughnessy, deputy commander of the U.S. military command in South Korea, said in a statement.

The show of force came 10 days after North Korea used a long-range rocket to fire a satellite into space. The U.S. military would not say how long the F-22s will be deployed in South Korea.

The F-22 Raptor, each costing $143 million, became operational in 2005, but only saw initial combat in attacks on Syrian ISIS positions in late 2014. The fifth-generation single-seat, twin-engine, all-weather stealth tactical fighter aircraft was developed for the United States Air Force (USAF).

Lockheed Martin was the prime contractor and was responsible for the majority of the airframe, weapon systems, and final assembly of the F-22, while program partner Boeing provided the wings, aft fuselage, avionics integration, and training systems. The aircraft was designed primarily as an air superiority fighter, but has additional capabilities including ground attack, electronic warfare, and signals intelligence roles.