Military Blog
You are here: Home / U.S. Commander and Army Son Could Both Deploy to Afghanistan 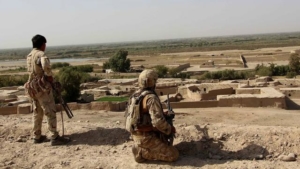 U.S. Commander and Army Son Could Both Deploy to Afghanistan

Army Lt. Gen. Austin S. “Scott” Miller, a three-star lieutenant general is expected to be approved by the Senate for another star and then take over from Gen. John “Mick” W. Nicholson Jr. as commander of U.S. forces in Afghanistan.

His son, Army 2nd Lt. Austin Miller of the 82nd Airborne Division, may be one of the troops who deply to Afghanistan under his father’s command.

The elder Miller, 57, is a West Point graduate who has spent much of his career with Special Ops in Bosnia, Iraq and Afghanistan. Most recently, he was commander of the Joint Special Operations Command, which includes Delta Force and SEAL Team 6.

Miller was among the first U.S. troops to enter Afghanistan after the 9/11 attacks of 2001. In June, 2013 he was once again in Afghanistan to command of Special Operations in the country. He also had a role in the training of the first two women to make it through the Army’s arduous Ranger training back in 2015

Miller was wounded as a Delta Force captain in the 1993 “Black Hawk Down” battle of Mogadishu, and again in Iraq in 2003.His awards include the Distinguished Service Medal, the Defense Superior Service medal, the Legion of Merit, the Bronze Star with combat ‘V’ device and two oak leaf clusters, and the Purple Heart with oak leaf cluster.

Appearing before the Senate Armed Services Committee for his confirmation hearing, Miller confirmed that the two-pronged U.S. mission would provide training to Afghan troops while going after terrorist groups like al-Qaida and the Islamic State in conjunction with Afghan commandos.

Miller did express surprise that troops were still deploying to Afghanistan. He looked over his shoulder at one point during the hearing and gestured toward his son.

“This young guy sitting behind me,” the general said, “I never anticipated that his cohort would be in a position to deploy [to Afghanistan] as I sat there in 2001 and looked at this.”