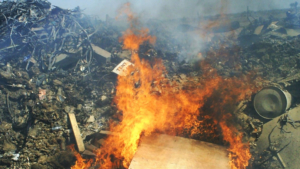 In what can only be termed as a major disappointment for burn pit veterans and their families, the 4th U.S. Circuit Court of Appeals agreed with a federal judge in Maryland and upheld the ruling that barred more than 60 lawsuits against KBR, Inc.

The former Halliburton subsidiary will not be held accountable for the health issues of more than 800 veterans who claim their illnesses were a result of the toxic burn pits they were exposed to during the wars in Iraq and Afghanistan.

The three-judge panel found that the lawsuits are barred under a legal doctrine holding that courts are not equipped to decide political questions; only Congress and the president have the power to resolve those. Furthermore, the military had unrestricted control over KBR so that KBR’s decisions on waste management and water services were “de facto military decisions” not appropriate for judicial review.

The victims have experienced health issues that include constrictive bronchiolitis, cancer, gastrointestinal disorders and neurological problems. It is believed that at least 12 service members have died from illnesses caused by the burn pits.

Advocates say more attention needs to be put on the issue to ensure that veterans don’t face a years-long wait for recognition of their injures, much like the position Vietnam veterans found themselves in with Agent Orange.

More than 141,000 veterans and current servicemembers have enrolled in Veterans Affairs’ Airborne Hazards and Open Burn Pit Registry, which allows individuals to document their experiences and illnesses with the department.

Taking Care of CaregiversU.S. Commander and Army Son Could Both Deploy to Afghanistan Scroll to top
Follow a manual added link