Blog
You are here: Home / Blog / Uncategorized / The Holidays and Military Service 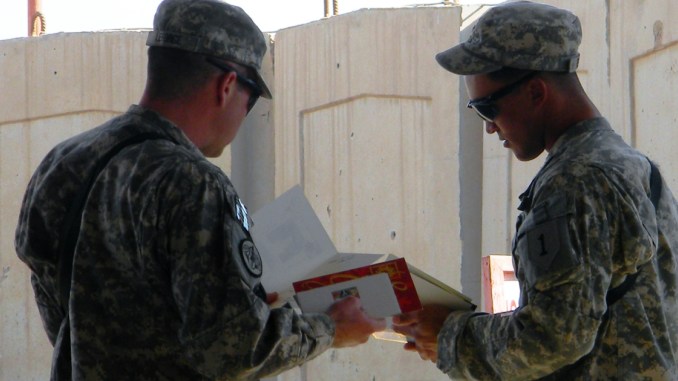 The Holidays and Military Service

As I write this piece for our blog, I feel a little bit of nostalgia coming on. We’re more than halfway through December, the snow has been falling for more than a day now, and the long-range forecast predicts that temperatures won’t be above freezing for the next few days. But after more than thirty years in uniform, my thoughts tend to drift, much like the snow. Drift, not so much to the days of my youth sledding on the hills of our farm, but to the holidays spent away from the ones I loved the most.

Like most of the old Soldiers I know, I have plenty of memories of time spent away from my family. Sometimes it was due to a field exercise or temporary duty somewhere, but the memories that really stick with you are those deployments that result in a family separation during the holidays.

For many, being apart during those holidays near the end of the year are the toughest. And while I’m a Christian, I’ve served with plenty of men and women of other faiths – and the separations as a result of military deployments are tough no matter what religious holidays you miss. For my family, the most special time of the year is Christmas…and I count my first and last deployments as my most memorable (and dreadful, and frightful) military experiences because of what I would rather have been doing during that time of year. I recently came upon a blog post on MilitaryTimes.com from Army wife Maria Cordova, where she shared survival tips from Military Spouses, tips for when loved ones are deployed during the holidays (https://www.militarytimes.com/opinion/commentary/2018/11/20/is-your-loved-one-deployed-during-the-holidays-military-spouses-share-their-survival-tips/). In that piece, she tells of a friend that was going to celebrate everything her Service Member was going to miss – celebrate those things before he deployed. And that’s exactly what my parents had planned for me, some 29 years ago.

My first family separation came as we were preparing to deploy in support of Operations Desert Shield and Desert Storm in late 1990. I was a young Field Artillery officer with no wife and kids, but with parents and three sisters and an extended family that meant the world to me. From the time President Bush (the first) announced on TV what we were doing in response to the invasion of Kuwait, it was asses-to-elbows, with not much down time. We were painting vehicles, receiving pieces of equipment that had once been considered luxury items, and loading trains. After our equipment was headed to the port, we had a few days off…so I headed home to see my folks for what I thought would be the last time for a while.

As I said earlier, my parents wanted to celebrate everything I was going to miss, so on one night in early November 1990, we had a Thanksgiving feast in one room of our farmhouse, a Christmas tree loaded with presents in another, a New Year’s Eve party (complete with Father Time) in yet another, and several birthday cakes at the kitchen table. It seemed a bit unusual at the time, but it made for great memories that we still talk about today.

My last deployment was a bit harder to tough out. A decade ago, I deployed with the Missouri National Guard to Kosovo for a nearly-year-long mission that found me serving at spots all around that country. While I wasn’t being shot at or fighting insurgents in the middle of Iraq or Afghanistan like many of my colleagues, I did find myself leading men and women over the Christmas holiday at a remote outpost in the northern reaches of Kosovo. A small desktop Christmas tree, a visit from Santa Claus (who arrived on an Army helicopter), and a short Skype call to my wife and young boys as they were opening up their presents at home – that was our holiday season in late 2008. And though it sucked being separated from family, being there with others in uniform – with men and women that I admired and respected – made it bearable, and memorable.

Those deployment experiences of mine, however memorable, stand in stark contrast to one another, but any time spent away from home and family is hard. And I know that the holidays aren’t so special for a lot of folks, but they were for me. Looking back, I feel fortunate that, for those holidays and for those ‘everydays’ during which I was called away from my family to serve, I was able to break bread and chew the fat with my other family, my brothers and sisters in arms.

Yes, I’m a bit older these days, and hopefully a little bit wiser. I retired from the US Army a couple of years ago and there’s a bit more gray in my beard than I would like. I consider myself lucky, I suppose – luckier than some of my comrades that didn’t return, and just plain lucky to have served in a career that I love. My youngest son just turned 18 years old and my oldest will turn 21 in just a few days…that in itself makes me feel my age. But when I think about all those special times with my wife and kids, I also think about those holidays when we were apart so many years ago. Those were tough times, but I’m thankful because we made it through them…and now they’re a part of who we are and where we’ve been. This holiday season, I ask you to remember that we still have thousands of Service Members deployed around the world, separated from their families. Keep them in your thoughts and say a short prayer for them every now and then.

Getting Trained for Your Next Career