You are here: Home1 / Zabihullah Tamanna 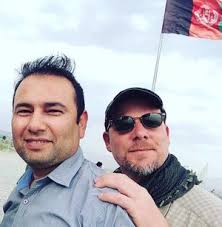 David Gilkey, an NPR photojournalist, and his interpreter, Zabihullah Tamanna, were killed while on assignment in Afghanistan.

Gilkey, 50,  and Tamanna, 38, were traveling with an Afghan army unit in southern Afghanistan when the convoy came under fire and their vehicle was hit by shellfire.

NPR Pentagon correspondent Tom Bowman and NPR producer Monika Evstatieva, who were also traveling in the convoy in a separate vehicle were unharmed.

Gilkey had worked at NPR since 2007, and in 2011 was named the still photographer of the year by the White House Photographers Association.

“I was saddened to learn today of the death of an NPR photographer, ‎David Gilkey, and his colleague Zabihulla Tamanna, who were part of a crew reporting on Afghan forces in the southern part of the country,” said Secretary of State John Kerry. “This attack is a grim reminder of the danger that continues to face the Afghan people, the dedication of Afghan national defense and security forces to securing their country, and of the courage of intrepid journalists — and their interpreters — who are trying to convey that important story to the rest of the world.”

Gilkey covered stories around the world, including Afghanistan, Somalia, Haiti, Gaza and Iraq.

“Ultimately, he felt it was really important to tell those stories and to tell them to a society that can very often forget that we have people in harm’s way on a daily basis,” said Keith Jenkins, the general manager for digital at the National Geographic Society who edited David at NPR.

Zabihullah, who leaves behind three small children, worked as a photojournalist for the Chinese news agency Xinhua. More recently, he wrote for Turkey’s Anadolu News Agency.

When the journalists’ remains arrived by helicopter at Camp Shorab in Helmand Province, where the U.S. Army 10th Mountain Division has a training mission, an honor guard of “dozens and dozens” of U.S. soldiers stood at attention and saluted.