You are here: Home1 / Volunteers 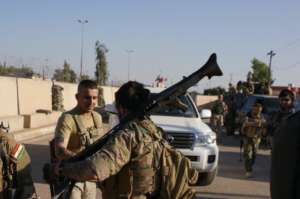 Although the U.S. State Department has strongly discouraged Americans from traveling to Iraq or Syria, much less taking up arms there, a new report estimates that more than one-third of all anti-ISIS Western volunteer fighters are Americans.

Compelled by reports of the Islamic State’s gruesome activities, the first volunteers came in the fall of 2014. They have enrolled in a number of regional militias including the peshmerga—the government-backed army of Iraqi Kurdistan

Almost all male and many military veterans, over 100 Americans have joined up with militia groups in Iraq or Syria to fight ISIS, according to an Institute for Strategic Dialogue report.

Relying on a database of 300 foreign fighters from Western nations, the report found that Americans are more prevalent in the groups than those from any other Western nation. Of the 26 countries that have citizens fighting ISIS, those with the highest proportion of volunteers are the United States, which accounts for 38% of all Western volunteers; followed by the United Kingdom at 14%; Germany at 8%; France and Sweden, both with 6%; and Canada, whose volunteers make up 5%.

Most of the volunteers are serving in Kurdish militias in Iraq or Syria.

With an average age of 32 and a variety of reasons for leaving home and traveling thousands of miles, many of these fighters are trying to make a difference in the Middle East.

But for U.S. military veterans, the motivations are a bit more complicated. According to the report, many of them may have had trouble adjusting to life as a civilian following their service. Many of them feel more at home in a war zone.

There are also those who said they came back to “finish the job,” the report says.