You are here: Home1 / Vietnam MIA 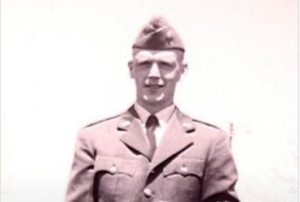 Rescuing a downed American pilot behind enemy lines in Vietnam proved to be Air Force Capt. Richard “Dick” Kibbey’s first and last mission. His HH-3E helicopter was shot down, and Kibbey was listed as missing in action after the crash.

His wife, Mary Ann Kibbey, never gave up hope that her husband would come home.

Her vigil ended when she died in 1979, still wondering about the fate of her husband.

The couple’s children finally got some closure when Kibbey’s dog tags were returned after being discovered by a Vietnamese farmer near the crash site. They were presented to the family by U.S. Rep. Bill Posey during a ceremony at Patrick Air Force Base.  Kibbey was also posthumously awarded a Purple Heart and a Silver Star for valor in combat.

For the Kibbey children, brothers Rick, Dave, John and sister Terry, the discovery of the dog tags has rekindled hope that their father’s remains will be found and returned home. The children hope to eventually reunite their parents by interring them side-by-side at Arlington National Cemetery.

“Families like the Kibbeys represent American endurance and pride,” said Air Force Col. Kurt Matthews. “Throughout our history, military families have served as the warriors of the home front, sacrificing much.”

Mary Ann maintained a large collection of magazines, hoping that her missing husband could read them and catch up on world events after returning from captivity.

“It always kind of touched me that she was trying to keep him up to date,” John Kibbey said.

Col. Matthews also said that it was appropriate that the ceremony was held at Patrick Air Force Base, home to the 920th Rescue Wing, which is a combat search-and-rescue unit.