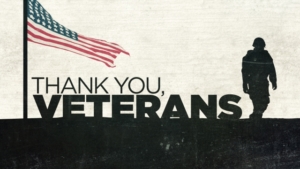 Greetings, friends. As we commemorate this Veterans Day, it is an honor to be able to visit with you on the Military Connection platform. It is an honor to have worn the uniform of the US Army, as well. I was a Soldier by choice, but an American by the grace of God.

We gather in many places to salute our nation’s Veterans. On the anniversary of Armistice Day, we pause to remember the brave men and women who served, and sometimes died for, our country. We remember the other men & women we’ve served alongside, lifelong friends who have the common bond of enduring hardships, pain, and even loss, as we contributed to something we considered priceless – the defense of our country. I feel privileged and proud to be part of a group that has done so much for so many.

We remember our battalions, our companies, our ships…our bombers, our tanks, and our cannons. We remember our patrols, our deployments…our battles & our homecomings. We remember our friends, our crews, our units – our first haircut, the mess halls, guard duty – we remember voices – shouting, laughing…and the tears. We, the ones that have served this nation, have these images and sounds and feelings burned into our minds, hearts, and souls…

We remember the brave men and women who have served in places such as Antietam, Gettysburg, and San Juan Hill; in the trenches of France, the beaches of Normandy, the deserts of Africa; the jungles of the Philippines, Guam, Okinawa, or Vietnam; the hills of Korea, the sands of Kuwait, the villages of Iraq, and the mountains of Afghanistan. Wherever and whenever our men & women are called to serve, they go.

For those Veterans who have stood guard in peacetime… to those who have seen the terror, the horror and inhumanity of combat — and to those who paid the ultimate sacrifice – our Veterans have always been there, defending the Constitution of the United States of America. The Veterans of our nation have been safeguarding our liberties since before the American Revolution.

On Veterans Day, we remember those who sacrificed at home and overseas. Where it was once specifically a celebration of the silencing of the guns of World War One, Veterans Day now marks a day when nations around the world pause and observe – with solemn, silent pride – the heroism of those who have served, those who are currently serving, and those who died in our country’s service, in that war and in all others. It is not a celebration of victory, but rather, a celebration of those who made victory possible.  It’s a day we keep in our minds the brave men and women of this young nation — generations of them — who above all else believed in, and fought for, a set of ideals.

Just as our Veterans chose to serve, I challenge & encourage all of you to volunteer your services to any number of endeavors…your school’s PTO, a local food pantry, or your church…the Little League or the high school feeder team’s Football Club. Service to country is very much like service to community.

Our communities are the fabric of our nation, and every one is a little different. From those communities, our Veterans bring those differences to the defense of our nation. Poor or wealthy, urban or rural…they bond together as Soldiers, Sailors, Airmen, Marines, and Coast Guardsmen. As our Nation’s sword and shield, our Veterans represent the strength and diversity of our nation.

This includes members of the Reserve Component – our Reservists & National Guardsmen. When serving in a traditional role, not federalized or deployed, these men and women are full-time members of the community. They work in your towns, their families attend your schools, and they commit themselves to the protection of your land and defense of your freedoms against all enemies, foreign and domestic.

Today’s National Guardsmen and Reservists, from all branches of service, are able to transition from the workforce to the fighting force with speed, grace and resiliency.  In this time of what seems like persistent conflict, they have endured tour after tour in distant and difficult places. I deployed twice while my sons were in elementary school. I remember the heartbreak of leaving my wife and children, but I also vividly remember the joy of coming home after a long deployment.

Those of us that have worn the uniform typically have a variety of reasons for having done so. For many, it’s a sense of Duty-Honor-Country, a belief in freedom, and a faith in America’s future. I think that one of the reasons why I served is that, on occasion, I had the opportunity to be in the presence of greatness…visiting with a Tuskegee Airman at a Missouri Veterans Home, or watching history come alive at the airport at 0400 as WWII Veterans gathered for a trip to see our nation’s memorials in Washington, DC, a part of the Honor Flight network.

So, whether it’s chatting with Veterans from WWII or trading war stories with those fresh from today’s battlefields, sometimes I get to shake the hands of some real heroes. That’s just one of reasons why I served, and why I’m proud…I am proud to be an American; I am proud to be a Veteran.

On Veterans Day, be sure to pause and remember the many Americans who have served. The Veterans of today are writing the history books that you, your children and your children’s children will one day study.

Thank you for taking the time to commemorate this special day in your own way. God bless our Troops, God bless our Veterans…and may God continue to bless the United States of America.