You are here: Home1 / Veteran report 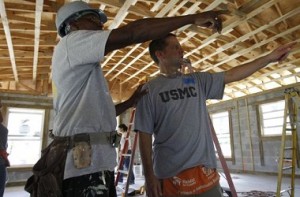 Each year, approximately 250,000 service members separate from the U.S. military, and are dispersed throughout communities across the country. The current generation of Veterans holds the distinction of having served during the longest period of constant warfare in our nation’s history. While, we, as a nation, have a tendency to support and acknowledge this generation of Veterans, at the same time, the American public also has many preconceived notions about Veterans that just aren’t true.

One of these notions is that Veterans are damaged in some way, and are in need of a handout. It’s true that there are issues of unemployment, underemployment, homelessness, PTSD and other service-connected mental and behavior health concerns that plague the Veteran community. But the simple truth is that many Veterans who transition into civilian life are not affected by these issues.

Got Your 6, a non-profit organization that unites other non-profits with assets in Hollywood and government agencies, published a report that offer the American public some different statistics about Veterans that could alter the way that Veterans are perceived.

The report is the 2015 Veterans Civic Health Index, titled, “America’s Greatest Assets: How Military Veterans are Strengthening our Communities.” All of the findings in the report are based on analysis of the Current Population Survey (CPS) data from 2012 and 2013, conducted by the Center for Information Research on Civic Leaning and Engagement (CIRCLE).

The purpose of the report is to help remove some of the negative stereotypes about Veterans. But it is important to remember that while many of the concerns we have for our Veterans aren’t necessarily applicable to all Vets, the Veterans who do suffer from such issues as unemployment, underemployment, homelessness, PTSD and other service-connected mental & behavior health concerns need and deserve our support.