You are here: Home / Veteran PTSD 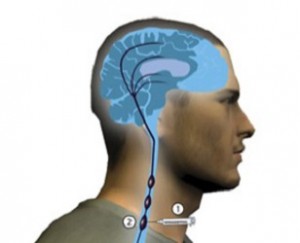 A 2012 survey by the Veterans Health Administration (VHA) found that 500,000 Veterans, who were receiving VA healthcare, were diagnosed with varying levels of Post-Traumatic Stress Disorder (PTSD). That number makes up roughly 10% of the total Veteran population. Additional studies revealed that as many as 20% of Veterans from the wars in Iraq and Afghanistan suffer from PTSD. Military, VA, and private sector doctors have been implementing a variety of treatments for the disorder and its symptoms. A treatment has yet to present itself as being the definitive cure for PTSD.

A decades old technique for applying anesthesia is currently being used to treat PTSD, with promising results. The therapy being used is called a Stellate Ganglion Block (SGB), an injection of local anesthetic in the nerve tissue located on the front of the neck. The nerves are a part of the sympathetic nervous system, and are located in the neck, on either side of the voice box.

For nearly a century, SGB has been used to reduce pain and swelling associated with Herpes Zoster, commonly called shingles. A stellate ganglion block works by disrupting the sympathetic nerves that go to the arms and the face. SGB’s have also been found to manage color and swelling in the face and increase mobility in the neck arms and shoulders.

While the procedure is not widely accepted as a potential therapy for PTSD, SGB has been studied by physicians at Naval Medical Center San Diego as a potential PTSD treatment. The treatment was found to improve symptoms in patients who were not responding to other traditional treatments, including medication and psychological therapy.

So far, a reported 70% of Veteran PTSD patients have reported that SGB treatments have been an effective remedy for such symptoms as anxiety, depression, and sleep disturbances.

But physicians are reluctant to embrace SGB, perhaps because they don’t yet understand how a physical treatment could relieve what is categorized as a mental health disorder. PTSD remains a largely unexplained condition. While it is still characterized as a psychiatric disorder, ongoing research points to a close relationship between PTSD, concussion, head injury, or other physiological changes in the brain.

The current treatments for PTSD in use at VA facilities include medications, primarily Paxil and Zoloft, prolonged exposure therapy, and cognitive processing therapy. But medications commonly mask symptoms, and don’t treat the condition. Studies show that cognitive therapy treatments are effective in fewer than half of patients with combat-related PTSD.

If SGB treatments continue to be effective in treating PTSD and its symptoms, it may cause physicians to rethink everything they know about the disorder. This could eventually lead to improvements in the treatment and prevention of PTSD for active military, Veterans and civilians.