You are here: Home / Veteran opportunities 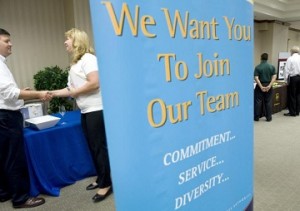 Finding meaningful employment is one of the biggest challenges faced by Veterans. But one of the best ways to remedy the employment situation is by letting Veterans know which companies are specifically looking to hire those with military experience.

Companies that are awarded federal government contracts employ approximately 25% of the American workforce. Federal law requires that these contractors cannot discriminate against former service members. There are even laws in place mandating these employers set affirmative action plans, with specified efforts to hire and promote Veterans, and report back to the federal government on their progress.

On September 24, 2013, the U.S. Department of Labor’s Office of Federal Contract Compliance Programs published a Final Rule on the Vietnam Era Veterans’ Readjustment Assistance Act of 1974. The update went into effect in March, 2014, and requires contractors to establish annual hiring benchmarks for protected Veterans (disabled and wartime Veterans).

Under the law, contractors can choose to establish a benchmark equal to the national percentage of Veterans in the civilian labor force, published in the Benchmark Database, below, and updated annually by OFCCP. Alternatively, contractors may establish their own benchmarks using certain data from the Bureau of Labor Statistics (BLS) and Veterans’ Employment and Training Service/Employment and Training Administration (VETS/ETA), also published by OFCCP, as well other factors that reflect the contractor’s unique hiring circumstances. The data is posted in the Benchmark Database, below.

Veterans can take advantage of jobs with federal contractors by looking at Military Connection’s Job Board. Veterans can also use the thousands of Labor Department offices, also called American Job Centers. Major federal contractors must list their available positions with these centers. Among the major employers with substantial government contracts are:

Scores of companies have been awarded major contracts by the federal government, and are looking to hire qualified Veterans. Perhaps the key to diminishing the Veteran unemployment rate is connecting Veterans to the right employers. Make sure that you and the Veterans in your life know where the jobs are.