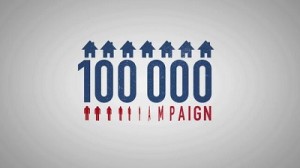 There is great news in the fight to end homelessness. The 100,000 Homes Campaign has met and exceeded their four year goal.

In a nutshell, the 100,000 Homes Campaign is a national call to “stop managing homelessness and start ending it.” The campaign, powered by the non-profit organization Community Solutions, functions through a network of 238 separate communities working together to find homes for homeless Veterans and civilian Americans. In 2010, the organization, led by former Army Captain Becky Kanis, vowed to find housing for 100,000 people by July, 2014.

As of July 25, 2014, the 100,000 Homes Campaign, through its network of participating communities, has assisted 101,975 individuals in finding homes. This number includes over 31,000 formerly homeless Veterans.

It is estimated that the success of the 100,000 Homes Campaign should save taxpayers $1.3 billion annually.

Several of the 238 participating communities have partnered with local VA branches and other non-profit Veteran organizations in order combat homelessness among Veterans. These groups allied and collaborated to identify previously unknown, chronically homeless Veterans on the streets who were in need of permanent housing. This coalition is helping the push to eliminate Veteran homelessness by the end of 2015. Key players in this fight have acknowledged the 100,000 Homes Campaign’s contribution to their effort.

Even with the realization of their initial goal the 100,000 Homes Campaign will not stop to bask in their success. The organization has vowed to continue its efforts. In January 2015, Community Solutions is expected to launch Zero: 2016, a national effort to build on the success of the campaign by helping communities get to zero on chronic Veteran homelessness.

Congratulations to Community Solutions and its successful 100,000 Homes Campaign. The staff at Military Connection looks forward to the launch of Zero: 2016, and are eager to report on that campaign’s success as well.