You are here: Home1 / veteran evicted 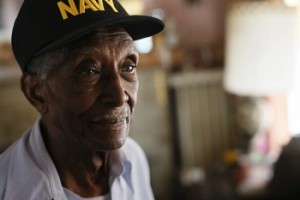 It was an unbelievable sight: 90-year-old World War II veteran Johnnie Hodges Sr being evicted from his home of 60 years, carried out strapped to a stretcher.

Refusing to leave his home in Buffalo, New York, despite missing more than $100,000 in loan repayments and utility bills, Hodges made it clear that the police would have to carry him out in handcuffs.

The events followed a four-year dispute with local authorities, and he was served with an eviction notice on July 9th.

Hodges, who served in the Navy, became deep in debt after his wife was diagnosed with Alzheimer’s and his health failed, causing him to lose his job . The veteran secured a second mortgage to make home repairs, but medical bills for his wife made it difficult to meet his monthly repayments.

‘I fell behind on the mortgage when my wife was sick. She had Alzheimer’s disease.’

“I worked a lifetime for this house, and I’d like to be here until I leave this world,” he said in a June interview.

Proudly wearing his Navy cap, Hodges looked defiant as he was carried out last week to be taken to a veterans home for a mental health assessment.
Meanwhile, the home where he raised his two children and nursed his wife of more than 65 years in her final days was emptied of his possessions. Movers took everything from the house, packed them into boxes and loaded them into two moving vans.

“There was nothing wrong with him emotionally or physically. His faculties are really good,” said his daughter, Robin,who watched the situation unfold that day. “That’s the only home that I know about,” she said. “That’s where I grew up.”

Hodges is currently living in a senior apartment in the neighboring town of Cheektowaga, N.Y., and he is determined to make the best of the situation. According to his daughter, he isn’t saying much about the eviction. “He just still believes that things are going to work out,” she said.
“It’s a sad day for everyone involved because this outcome could have been avoided. “We’ve worked on this case for more than four years, involved local not-for-profit agencies and even worked with private citizens who were willing to arrange for him stay in the house for free, however all offers of assistance were refused,” C. Michael Zabel, vice president of corporate communications for M&T Bank, said in a statement. “Under the rules that govern FHA mortgages such as this one, we went far above and beyond what was required, but there was nothing else we could do.”