You are here: Home / veteran affairs

Former Lance Corporal Brian Easley had fallen on hard times. The 33-year-old former Marine was barely getting by on a small monthly disability check from the Department of Veterans Affairs.

Back aches, a marriage and child in quick succession, his mother’s death and mental illness started a downward spiral that Easley couldn’t escape. The last thing he needed was an issue with his disability check, but that occurred when the check mysteriously failed to materialize.

Calls to the Veterans Crisis Line and a trip to the VA’s Regional Benefits Office in Atlanta failed to resolve the issue.

Out of desperation, Easley entered a Wells Fargo bank and claimed he was carrying C-4 explosive. He took two employees hostage and alerted the authorities and the media. He had no intention of robbing the bank or hurting the hostages. His goal was to draw attention to his plight.

Diagnosed with PTSD and suffering from schizophrenia and paranoia, Easley was already on the edge. His monthly VA disability check came to $892. When July 1 2017 came and went, and the expected funds were not in the account, Easley began to panic.

That panic led the soft-spoken, shy veteran to snap.

While it turned out that his check had been garnished due to a tuition issue, he was suffering from a severe mental illness, one that should have been recognized by the VA and dealt with accordingly.

Many of the law enforcement officers who responded to the crisis at the bank were former military. Cobb County Police Chief Mike Register served on a mobile reconnaissance team in Afghanistan with the 20th Special Forces Group. Sgt. Andre Bates, the lead hostage negotiator, served in the Marine Corps, as did Joel Preston, the commander of the tactical team, and Officer Dennis Ponte, the sniper who eventually ended the situation when he took Easley’s life.

After a negotiated trade for one of the hostages was made, the logistics of the plan were being worked out. It was during that planning session that Officer Ponte made a fateful decision, and for reasons unknown, took his shot.

The contents of the backpack were a Bible, some papers, and a small machete, among other incidentals. No C-4. No surprise. 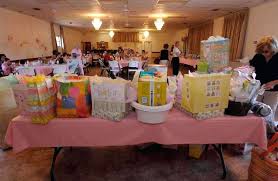 In conjunction with a number of national organizations, the Department of Veterans Affairs is hosting the first nationwide baby shower for veterans and caregivers welcoming new babies in 2018.

Partners who provided valuable and generous contributions to the success of the baby showers include:
• The Elizabeth Dole Foundation
• Philips
• Veterans Canteen Service
• The American Legion
• The Carrying On Project
• Burt’s Bees Baby
• The Red Cross
• The Veterans of Foreign Wars
• Halo
• First Quality Enterprises

Sixty VA medical centers across the U.S. will host the event, which run from May 5th to the 16th, which will celebrate the joyous occasion with more than 2,400 new parents and parents-to- be. While open to both male and female veterans welcoming babies this year, the idea is to put a spotlight on the key services that the VA offers women.
Attendees will receive two new baby packages with useful gifts for parents-to-be. Besides providing helpful resources for veteran caregivers provided by the Elizabeth Dole Foundation, kits will include baby products from Philips, as well as a diaper bag, hair brush and comb set, bib, layette, blanket, hat, and toiletries.
A number of bigger ticket items, including car seats and cribs, will be given out at each shower. If you would like to sponsor a kit for a deserving veteran family, just $50 will allow you to purchase a new baby kit to be distributed at a local Baby Shower. The sweet and sensible new baby package contains a variety of useful baby products. The kit includes:

Go to https://www.promoplace.com/205353/stores/Babyshower to purchase a gift that says,
“Thank you for your service” and congratulations from a grateful nation.