You are here: Home1 / VA organization 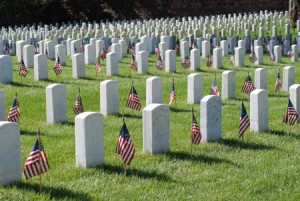 There is a bill making its way through Congress intended to remedy the recently reported delays in wait times for Veteran burials.

Over the past year, there have been reports of long delays for the interment of deceased Veterans at Department of Veterans Affairs (VA) national cemeteries in California, and elsewhere around the country. Rep. Ed Royce (CA) proposed similar legislation earlier this year in the House. Congressman Royce cited a May report by the Los Angeles Times that stated that 52 unclaimed bodies of deceased Veterans had accumulated in the Los Angeles County morgue.

Under the Senate bill, the VA would be required to track and record any burials not completed within a month, as well as what entity would be responsible for the bodies, including local medical examiners, funeral directors, and county service groups. Also, data on the burial delays would be collected in an annual report and given to Veterans’ Affairs congressional committees.

On the heels of 2014’s VA scandals and subsequent reform, many politicians and citizens will be quick to lash out at the entire VA over these claims. No one wants to see the same mistakes made by the same people. But if the reports are true, the same people would not be to blame.

It is important to note that when talking about wait time problems within the VA, different administrations collectively make up the VA, and operate independently from each other. An example of this would be how the Army and the Navy both operate under the Department of Defense, but are completely different entities.

The reports of delays within the National Cemetery Administration and its system of 131 cemeteries are completely separate from the highly scandalized patient wait times within the VHA. But none the less, the reported wait times at VA cemeteries will only add to the problems that the VA is already in the process of correcting. In order to be respectful to these Veterans, the issues need to be remedied immediately and effectively.