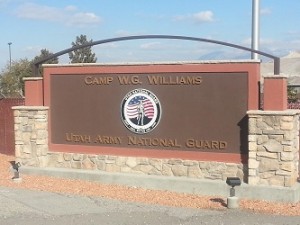 Members of the Utah National Guard are in hot water after allowing a video, complete with bikini-clad women riding tanks and firing high powered weapons, to be shot on their installation.

An internal investigation conducted on Camp Williams in Bluffdale, Utah, found that a film crew shooting a risqué “behind the scenes” video of a pinup calendar was escorted on to the installation where the Utah National Guard trains. The women wore suggestive clothing, rode in military vehicles, and even fired weapons.

An unidentified non-commissioned officer, with a 19th Special Forces detachment headquartered out of Draper, Utah, has been relieved of his leadership position. He also faces a reprimand and forced early-retirement. At least three other unidentified soldiers will also face lesser disciplinary actions. All four soldiers were ordered to reimburse the Utah National Guard approximately $200 to cover the cost of the fuel that was consumed during this escapade. Two members of a local police SWAT team also appeared in the video, in uniform, and also face disciplinary action from their superiors.

A statement in defense of the four soldiers indicated that the members of the Utah National Guard didn’t supply the crew with weapons or ammunition, and that the makers of the video brought and used their own. The investigation apparently confirmed this report.

This may be even more troubling, as the film crew, which included foreign nationals, brought weapons and ammunition onto a U.S. military site and fired them. To say that these service members made a foolish mistake is grossly understating the situation. Many commenters, including Veterans, are wondering what the harm in the situation was. Well, not only were military vehicles and property misused for a frivolous, if not completely inappropriate purpose, but security was breached and most importantly, the uniform was disrespected.

For more than a century, the U.S. military community was an all-boys club. Men assigned to fight in all-male units were allowed to talk and act differently than they are today. Military leadership counseled, motivated and fraternized differently with their “men.” But today’s modern military is a diverse fighting force, made up of men and women from all ethnicities and ideologies. Things that were normal “back in the day” just aren’t acceptable now. This means that allowing a bikini photo shoot should not be allowed.

But at no time was it ever acceptable to allow visitors onto a military installation with weapons and ammunition. This lapse in judgment is disappointing, to say the least. The reason that I am writing about it is to state clearly that this behavior would have been wrong yesterday, and is wrong today. It should not be shrugged off as “old fashioned fun,” but viewed as a stupid decision that should never be repeated.