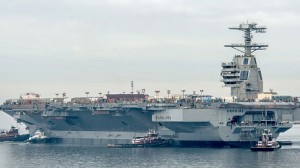 On December 10, 2014, a federal judge denied bond for a man who attempted to sell technical plans of the U.S. Navy’s newest aircraft carrier to foreign agents.

Mostafa Ahmed Awwad was arrested on December 5th for stealing schematics for the U.S.S. Gerald R. Ford, and attempting to sell them to who he thought was an Egyptian intelligence officer.

Awwad, 35, currently resides in Yorktown, Virginia. Originally from Saudi Arabia, Awwad immigrated to the U.S. in 2007, and became a citizen in 2012. Awwad graduated from Old Dominion University in 2013, and began working at the Norfolk Naval Shipyards as a Navy civilian engineer in the shipyard’s nuclear engineering and planning department.

The charges against Awwad state that in late October, he attempted to steal technical data of the designs of the USS Gerald R. Ford. Awwad also provided computer drawings downloaded from the Navy to an undercover FBI agent, posing as an Egyptian intelligence officer. The undercover agent speaking in Arabic contacted Awwad in September, and got Awwad to meet him at a park the next day. At the meeting, Awwad declared his intention to use his position of trust with the Navy to obtain military technology and then pass it on to the Egyptian government.

Awwad and the undercover FBI agent met again in October. During this meeting, the engineer is alleged to have described a plan to circumvent Navy computer security by installing software enabling him to copy documents, without tripping a security alert. Awwad reportedly gave the undercover agent drawings of the aircraft carrier, marked with warnings that foreign distribution could result in criminal prosecution. Awwad indicated to the agent that he understood the computer drawings would be used in Egypt. He also agreed to provide the agent with passport photos to produce a fake Egyptian passport so Awwad could travel without alerting U.S. government officials. The affidavit also claimed that Awwad asked the agent for $1,500 to buy a tiny camera which would enable him to photograph restricted material around the shipyard.

The FBI has evidence of Awwad completing a cloak-and-dagger drop that was coordinated with the undercover agent. On October 23rd, Awwad stashed an external hard drive and two passport photos on a secluded area of a hiking trail, in exchange for $3,000 in cash that was left at the site.

The information that Awwad was trying to sell would have put the USS Gerald R. Ford’s future crew of 4,000 sailors at risk. It is also alleged that Awwad told the agent that he would be able to plant tracking devices on American submarines. If all of his claims are true, and evidence points to that likelihood, Awwad was a serious threat to the U.S. Navy.

Given the enormity and seriousness of the charges, U.S. Magistrate Judge Douglas Miller denied bond for Awwad, which would not allow the engineer out of prison pending trial. Awwad faces up to 40 years in federal prison.