You are here: Home / USC’s Institute for Creative Technologies 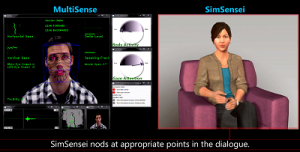 For all of the glass-half-full people out there, there is a positive side to all of the unfortunate physical and mental wounds endured by our men and women in uniform over the last twelve years at war. Out of necessity, advances in medical and behavioral healthcare have progressed by leaps and bounds since 2001.

One of the latest advancements is a virtual therapist. This resource could make it much easier for service members to talk about subjects such as PTSD. Most people, service members included, don’t feel comfortable talking to other people about their major issues, and often don’t tell them the entire story.

The Institute for Creative Technologies at the University of Southern California (USC) conducted a study recently, and found that according to the study participants, virtual interviews were reported to be less intimidating. Participants reported that when it came to talking about their problems, they were more willing to open up to a virtual therapist than a human one.

In Afghanistan, the Army has implemented a virtual therapist named Ellie to help their soldiers. Ellie is the smooth-voiced, calm-toned, active listening, and non-judgmental face of a computer program that runs off of a Microsoft Kinect motion sensor. Using Kinect to gauge a patient’s mannerisms and expressions, Ellie responds and listens in-turn, and even urges patients to keep talking with a well-timed “uh-huh,” and a nod of her head. She also changes her facial expression and leans forward to display these active listening mannerisms to her patients.

To see Ellie in action, please view a Youtube video that has been posted by USC’s Institute for Creative Technologies.

Ellie is not intended to permanently replace human therapists. The virtual therapist is, instead, designed to be used as a screening tool for service members who could potentially face mental health issues, including post-traumatic stress and depression, after the get home from war.

Ellie’s program, called SimSensei, could be used as a screening tool for the military and hospitals. Currently, it’s being tested by members of the National Guard in Afghanistan. But eventually, it could be used by civilians suffering from everything from depression to cancer.

Researchers claim that the advantages of utilizing virtual therapists is that a computer doesn’t get tired,  has no personal history or biases to interpret people through, and can more efficiently gather and analyze massive amounts of patient data for trained professionals, who can then take over the treatment.

The U.S. Army and the Defense Advanced Research Projects Agency (DARPA) is sold on the idea of utilizing virtual therapists, and have funded the research. Plans are in the works to implement virtual therapist booths in VA hospitals. The actual hardware needed  to run SimSensei, is not expensive. SimSenei runs off of the Microsoft Xbox 360 Kinect game console that sells for as little as $99 (monitor not included).