You are here: Home1 / unexploded 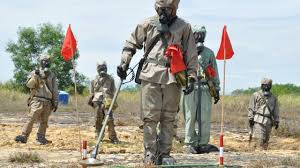 Unexploded ordnance experts have been searching for military munitions off Hawaii’s Makua Beach, focusing on a 22-acre area after a 5-inch projectile was found offshore in 2016.

“It’s about the length of two football fields and the depth of one football field,” said Col. Steve Dawson, of U.S. Army Garrison Hawaii.

Unexploded ordnances are explosive weapons (bombs, shells, grenades, land mines, naval mines, cluster munition, etc.) that did not explode when they were employed and still pose a risk of detonation, sometimes many decades after they were used or discarded.

The Army expects the search, which is just about to wrap up, to cost approximately $3.5 million.

In 2011 that a recovery effort at Ordnance Reef resulted in the removal of approximately 2,380 small, medium and large items that appeared to be munitions. A total of 331 pounds of explosives was destroyed, the Army said.

The munition found in 2016 was recovered and destroyed by the Navy. During World War II, the military practiced beach landings at Makua. It’s possible more rounds fired from Navy ships fell short of land. Additionally, Makua Military Reservation was used as a firing range by the Army.

Excess World War II munitions were also dumped by the military in such a quantity over a 5-square-mile area off Pokai Bay that it became known as “Ordnance Reef.”

The search, which was conducted on weekdays, utilized UXO-qualified divers with metal detectors and a global positioning system (GPS) to scan the ocean floor, according to Col. Dawson.

The delay in launching the project after the 5-inch round was found was due to the Army needing to obtain federal unexploded ordnance removal funding, as well as access to a fully operational and staffed hyperbaric chamber, which was a safety regulation required for the divers.