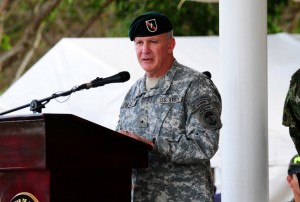 The commander of U.S. Special Operations forces in Central and South America was removed from his post and demoted to colonel for repeated episodes of public intoxication.

Former Army Brig. Gen. Sean P. Mulholland assumed command of SOCSOUTH in October 2012, was removed in August 2014. Mulholland repeatedly became intoxicated in public, including during a deployment to Peru in 2013. He allegedly got into alcohol-fueled altercations with civilians “that culminated in physical contact in front of civilians and enlisted personnel,” according to the letter of reprimand.

The Army general was cited for an incident in the spring of 2014 at a golf club and bar in Homestead, Fla., near the headquarters of U.S. Special Operations Command South when he drank and got into “a verbal altercation” with three civilian women that required others to intervene.

In his reprimand, Mulholland’s behavior was deemed unacceptable, demonstrating a failure of personal and professional judgment and causing embarrassment to the command.

Adm. William H. McRaven, then commander of U.S. Special Operations Command, “removed Brig. Gen. Mulholland from command and Mulholland retired on May 1, 2015, in the lower grade of [colonel]. Under federal law, the Secretary of the Army has authority to make retirement grade determinations involving general officers,” according the Army’s statement.

An Army Grade Determination Review Board recommended to Secretary of the Army John McHugh that Mulholland last served satisfactorily at the grade of colonel, according to the Army statement.

“This reduction in grade underscores the Army’s commitment to holding senior leaders accountable, and is consistent with Secretary McHugh’s treatment of similar cases,” according to the statement.

When Mulholland, 55, was removed as commander, military officials said in a statement that he was “retiring for health and personal reasons,” but they withheld the fact that he had been investigated and reprimanded for misconduct.