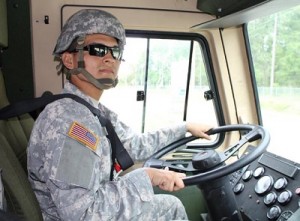 On July 25, 2014, the U.S. Department of Transportation (DOT)  and its Federal Motor Carrier Safety Administration (FMCSA) announced that the program to assist Veterans and transitioning service members find civilian employment as commercial drivers has been expanded to include all 50 states and the District of Columbia.

The DOT’s program began in 2011, as part of Michelle Obama’s and Dr. Jill Biden’s Joining Forces Initiative. The waiver program authorized state licensing agencies to waive the skills test portion of the commercial driver’s license application process for active duty military and recently separated Veterans who possessed at least two years of military experience operating a truck or bus in that class. By waiving the skills portion of the application, the DOT reduced the cost of obtaining a civilian license for those Veterans, and expedited the process for them.

Over the past three years, the DOT’s campaign has expanded throughout the country. On June 27th, Alaska became the final component for the program’s version of “Manifest Destiny.”

Along with celebrating the successful expansion of the program, the announcement also included two additional components within the program. First, the eligibility period for qualified Veterans to obtain an FMCSA Military Skills Test Waiver has been extended from 90 days to one year from their separation date. Second, starting with Virginia residents, returning military service personnel who possess a state-issued Skill Performance Evaluation (SPE) certificate, due to an impairment of one or more limbs, will automatically be recognized as equivalent to an FMCSA-issued SPE certificate and allowed to obtain an interstate Commercial Driver’s License (CDL).  FMCSA encourages other state licensing agencies to establish comparable equivalency SPE programs.

Over 6,000 current and former military personnel from all branches of service have taken advantage of the Military Skills Test Waiver Program. From 2010 to 2020, the need for heavy-vehicle drivers is expected to grow by more than 17%, making it one of the most rapidly growing employment industries in the country.