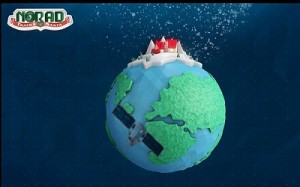 NORAD, and its predecessor, the Continental Air Defense Command (CONAD) have been tracking Santa Claus for 59 years.  According to the website, the tradition began in 1955, when a Sears Roebuck & Co advertisement listed the wrong phone number for Santa Claus, and gave eager children the CONAD commander’s ‘hotline” instead. With the influx of calls and the quick thinking of then-Director of Operations, Colonel Harry Shoup, staff members began fielding the calls and giving children updates on Santa, as seen from their radar. From a simple mistake and the kindness of service members, a great tradition was born.

New features to the 2014 edition of NORADSanta.org include fun activities for Christmas lovers of all ages. The North Pole location lets users visit Santa’s Village, with access to a festive menu of games, music, movies, and special NORAD intelligence on Santa Claus. You can also visit the online Gift Shop, where you can buy official Santa and NORAD gear.

From the home page, there is an official Santa Tracker countdown that keeps track of the days, hours, minutes and seconds until the NORAD tracking of Santa’s sleigh, beginning at 12:01 a.m. MST on December 24th. While kids and parents wait for the countdown, there are fun Christmas themed games that can be played on the website and its apps. There are 23 games that will be unlocked, one game each day, between December 1st and 23rd.

The holiday movies and music available on the website will get anyone in the holiday spirit. There is also a library that provides information about Santa, and proof that Santa Claus is real. The library also provides special NORAD specs on Santa’s sleigh, holiday activities, and information about holiday traditions around the world.