You are here: Home1 / The Jeff Miller and Richard Blumenthal Veterans Health Care and Benefits... 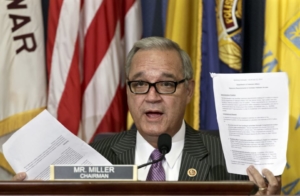 The law fails to address several controversial issues, including: a solution to the veterans appeals process, new accountability procedures for VA employees or an extension or alternative to the Veterans Choice Program. Those challenges will get punted to the 115th Congress.

According to the Congressional Budget Office, the law will raise VA appropriations by only $33 million over the next five years, with 1/3 of spending earmarked for “reports, studies and surveys.”

The Veterans First Act, which a bipartisan majority approved in May, had a host of substantive initiatives, most notably expansion of the VA caregiver benefit to families of older generations of severely injured veterans back to World War II.

The law’s most welcomed provision bestows honorary “veteran” status on many Reserve and National Guard retirees who, until now, have not been recognized as such. Affected retirees spent careers in reserve components, attending monthly and annual drills, but never having completed a qualifying period of active duty service under Title 10 to meet the legal definition of veteran and receive a DD-214 “Certificate of Release or Discharge from Active Duty.” Today, however, they are able to be call, and to call themselves, veterans.

Other highlights the law will require the VA to enter into an agreement with the National Academy of Medicine to conduct an assessment on scientific research relating to the descendants of individuals exposed to toxins including Agent Orange; direct the VA to provide a medallion to be affixed to a privately purchased headstone or marker of an individual, signifying their status as a veteran, if they served in the Armed Forces on or after April 6, 1917; require the VA to arrange for an independent assessment of exams it gives individuals seeking disability compensation for traumatic brain injury; authorize contract physicians to conduct compensation and pension examinations at any location in any state as long as exams are within the scope of the authorized duties under the contract; and expand the U.S. Court of Appeals for Veterans Claims from seven judges to nine to help address a backlog of claim appeals