Tag Archive for: The Force Awakens

You are here: Home1 / The Force Awakens 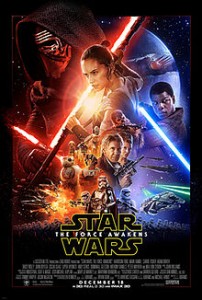 “Star Wars: The Force Awakens” headed to Afghanistan, Iraq, Kuwait and the United Arab Emirates, where troops were able to see the movie just a few days after its U.S. release.

The list of locations where the movie was screened was not made available for force protection reasons. But local commanders were able to get the word out through normal channels.

This latest installment in the Star Wars franchise was directed, co-produced, and co-written by J. J. Abrams. It is set approximately 30 years after Return of the Jedi, and follows Rey, Finn, and Poe Dameron’s fight with the Resistance, led by veterans of the Rebel Alliance, against Kylo Ren and the First Order, descended from the Galactic Empire.

The first film in the series, Star Wars (later subtitled Episode IV: A New Hope), was released on May 25, 1977 by 20th Century Fox, and became a worldwide pop culture phenomenon. It was followed by the similarly successful sequels The Empire Strikes Back (1980) and Return of the Jedi (1983). These three films constitute the original Star Wars trilogy. A prequel trilogy was later released between 1999 and 2005, which received a more mixed reaction from critics and fans, compared to the original trilogy. All six films were nominated for or won Academy Awards, and were commercial successes

The screenings were part of AAFES’ longstanding policy of bringing first-run movies to troops deployed overseas.

“Providing service members with first-class entertainment plays a key role in maintaining the morale of our deployed forces,” said Trinidad Saucedo, AAFES’ senior vice president of services, food and fuel, in a statement.

Ken Caldwell, senior vice president of North American sales and distribution for The Walt Disney Studios, released a statement saying, “Our men and women in uniform represent the best and bravest, and it’s an honor to do something special as a thank you for their service.”