In an effort to open the door to more recruits who would otherwise be barred from service because of their body ink, the U.S. Air Force is revamping its restrictions on tattoos.

The U.S. Marines overhauled its tattoo restrictions about six months ago, with the goal of balancing “the personal desires of Marines with high standards of professional military appearance and heritage.”

The new Air Force tattoo policy, which goes into effect on February 1, eliminates the “25% coverage rule” which limited the relative size of tattoos on the chest, back, arms and legs. The rule had required that no tattoos cover more than 25% of the body part or readily visible when wearing a uniform.

The policy will not affect areas of the body where tattoos are currently not allowed, including the neck, face, head, tongue, lips and scalp. Hand tattoos will be limited to a single-band ring tattoo on one finger of one hand. The Air Force said that would preserve the ability to present a formal military image when required with dress uniforms at certain events.

Tattoos, brands and body markings that are obscene, affiliated with gangs or extremist groups, along with those that advocate sexual, racial, ethnic or religious discrimination, are still banned.

One in every five people looking at signing up had tattoos requiring review or that could be considered disqualifying, the Air Force said.

“These changes allow the Air Force to aggressively recruit talented and capable Americans who until now might not have been able to serve our country in uniform,” Chief Master Sgt. of the Air Force James A. Cody said. 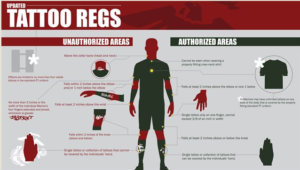