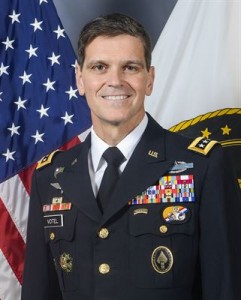 The four star general who serves as the head of the U.S. military’s most elite forces doesn’t just talk the talk.

When it comes to ending the stigma of seeking mental health help, Army Gen. Joe Votel, commander of U.S. Special Forces Command, openly admits to using the support programs offered by the military for his own family.

The 35-year veteran of Special Operations is leading by example, saying, “It is absolutely normal and expected that you will ask for help.”

“The injuries that our people deal with aren’t always physical ones,” said Votel. “These are hard-charging people. They suppress stuff and it comes out later, and so we have to have the capability to take care of that.”

Many servicemembers and veterans are reluctant to admit that they need help. They allow the fear of being labeled keep them from seeking help. But with treatment, relief can be attained by identifying the problem and reducing the symptoms that interfere with living a balanced life.

Votel wants to stress especially to those in active duty, that going to a counselor won’t hinder their careers.

“If you hurt yourself doing (physical training) in the morning, you go to the doctor and be taken care of … and it’s the same way if you’re having stress or emotional issues,” Votel said. “We want you to come forward.”

The Campaign to Change Direction helps identify the signs that indicate someone is at risk. If you don’t already know the signs, I invite you to visit http://www.changedirection.org/know-the-five-signs/ to learn the five signs. You could very well be saving a life. But at the very least, you will expressing your gratitude to those who have sacrificed so much for our freedom by showing them care and compassion.