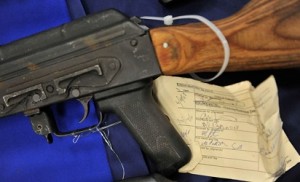 Two members of the Army National Guard were arrested in California, accused of selling weapons, ammunition and body armor.

On seven separate occasions, the two soldiers sold  a total of $13,000 worth of military property to undercover agents from the U.S. Bureau of Alcohol, Tobacco, Firearms and Explosives (ATF). The items included: four AR-15 rifles, an AK-47 assault rifle, a .40-caliber pistol, and a 7.62-caliber SKS rifle, body armor and thousands of rounds of ammunition. Reyes claims that some of the guns were his, and that he purchased them in Texas.

The undercover ATF agents told the two soldiers that they were members of a Mexican drug cartel, and that the guns would be transported into Mexico. Both men were reported to have been in uniform for at least one of the meetings with the agents.

Reyes and Casillas were arrested on April 16, 2015. Each man faces a charge of dealing firearms without a federal license. Reyes faces an additional charge of unlicensed transportation of weapons. Casillas is a Mexican national, and may have joined the military to assist in becoming a U.S. citizen. Both men are considered to be flight risks because they each travel to Mexico as many as four days/week.

There is no defending this behavior. Stories like this always beg the question, how did no one notice? I wonder what sort of investigation will be happening at that armory and what procedural changes will take place? As a Veteran, stories such as this, that tarnish the military that I served in, disgust me. The fact that I have to report them makes me even more uncomfortable. But I hope that some service members may read this article or hear about this incident, and become more observant where they work. Ensuring others aren’t acting in a similar matter will uphold all of the virtues our military represents.