You are here: Home1 / solar energy 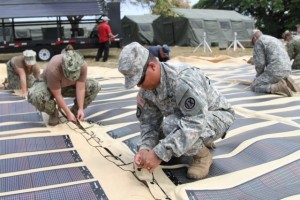 In the first workforce training partnership between a civilian federal agency, the Department of Defense and individual military branches, the SunShot Initiative’s Solar Ready Vets program is training our nation’s transitioning servicemembers for careers in the solar energy industry. Upon completion of the program, these veterans are ready for careers as solar photovoltaic (PV) system installers, sales representatives, system inspectors, and other solar-related occupations, great jobs for military veterans.

In the U.S., employment in the solar industry has steadily increased 123% over the past five years. Veterans are strong candidates to fill these positions because they are disciplined, motivated, and technically savvy.

Solar energy is one of the fastest growing industries in the United States and a major source of new jobs. Employment in the solar industry is expected to grow by nearly 15% in 2016, continuing into 2020 – with rising demand for more highly-trained, skilled workers. With at least 190,000 veterans leaving the U.S. military each year for the next several years, the Solar Ready Vets program matches highly qualified individuals with growing industry demand.

The Energy Department has secured commitments from some of the largest U.S. solar companies to interview graduating military trainees for employment, a step that will help place qualified trainees in the high-paying jobs for which they received training. So far, the program has been hugely successful, with, every graduate of the program having received at least one job offer from a solar company.

During the pilot phase, the program has been tested and designed  at three military installations: Camp Pendleton in California, Fort Carson in Colorado, and Naval Station Norfolk in Virginia.  The Energy Department is working with the Department of Defense to expand the program to a total of ten military bases by late spring 2016.

Future locations will be evaluated based on the number of exiting military personnel, the strength of the surrounding solar market, and the training capacity of nearby DOE-supported training institutions.