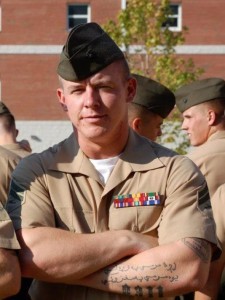 More than 1,000 people have signed a petition calling for Marine Corps leaders to change the tattoo policy in order to save the career of a Marine whose body ink ran head-on into the Corps’ regulations.

Sgt. Daniel Knapp got a new tattoo on his forearm, a pair of crossed rifles and the numbers 0311 — the Corps’ designation for Marine riflemen — to commemorate his 2011 deployment to Afghanistan. This action caused a major hiccup in his career, as he was denied re-enlistment by Marine Corps headquarters, despite a policy waiver endorsed by leaders within his parent command

While Knapp acknowledges that he violated the Corps’ tattoo regulations, he said many Marines don’t understand the complicated and lengthy policy. But no matter how this plays out for him personally, even if he can’t save his own career, Knapp said he wants his story to be a cautionary tale for others.

Marine leaders argue that excessive tattoos detract from the neat appearance that sets Marines above all others, hence their support of tighter restrictions. In 2011, when the last updates were finalized, changes included limiting the size of tattoos visible in PT uniform to the size of a wearers hand and the number visible in PT uniform to just four for officers. Also, the width of band tattoos was limited to 2-inches maximum for officers and one-quarter of the body part they cover for enlisted Marines.

Although the tattoo that derailed Knapp’s career is Marine Corps-themed, its size and placement are in violation.

“A Marine with tattoos doesn’t mean you’re a bad Marine,” said Sgt. Maj. William Wiseman. “However, since tattoos are a visual reminder of your personal thoughts, feelings and ideas, a Marine with visible tattoos may not be the best candidate for a high-profile assignment. Since the Marine Corps has the most recognizable uniform in the world, this makes the Corps a high-profile assignment. … You joined the Corps; the Corps didn’t join you.”

While “grandfathering” provisions were made for Marines who already had tattoos that didn’t meet the new guidelines, these Marines were no longer eligible for certain special duty assignments, such as recruiting posts.

Knapp feels that the Corps needs to rethink this policy. “Decisions should be made based on what is good for Marines, to fight wars and be ready.”