You are here: Home / Sarah Birman 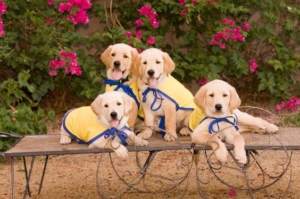 With an increase in post-traumatic stress disorder (PTSD) diagnoses within the veteran community, the Department of Veterans Affairs is joining forces with non-profit Canine Companions to study how service dogs might be able to aid those struggling with the disorder.

The joint pilot program is launching at Canine Companions’ Northwest Training Center in Santa Rosa, CA, with the initial participants being chosen within 90 miles of the Santa Rosa facility.

The dogs will be trained in tasks including nightmare interruption, turning on lights, retrieving items, and supporting their handler in crowded public situations that might provoke anxiety for individuals with PTSD.

The study will piggyback on a less formal program the VA kicked off in 2014, although this study will be more comprehensive and more tightly controlled.

“We believe that dogs can be trained in tasks that can help mitigate aspects of PTSD and help someone in their process of recovery along with other resources that exist already,” said instructor Sarah Birman.

Canine Companions will choose the dogs that will participate in the program based on their temperament, confidence and energy levels. They will need to be able to resist reacting to outside stimuli. The organization hopes to place some 20 dogs during the first year of the study.

“Service dogs are another tool that is available to veterans,” she said. “I think the more options that we make available to people the more people will be able to hopefully find something that works for them. PTSD can be an incredibly debilitating condition and really tremendously isolating, and so, if through these dogs we can make a difference in the lives of even just a handful of veterans, then it will absolutely have been worth it.”

Canine Companions has been providing service dogs for people with physical disabilities since 1975.