You are here: Home1 / salas 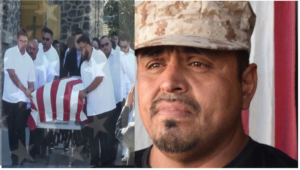 Persian Gulf War veteran Lance Cpl. Enrique Salas put his life on the line for the country he called home since he was a six year old boy. How unfortunate for him that his adopted country was unsympathetic to his plight when he brought the after-effects of military service home with him.

Like many of his fellow service members, Salas was diagnosed with post-traumatic stress disorder, and he also struggled with drugs. But it wasn’t war, suicide or drugs that killed him; Salas died on April 12th at age 47, succumbing to complications stemming from injuries suffered in an auto accident.

In 2004, Salas was convicted for possession of a controlled substance for sale, an aggravated felony that made his deportation mandatory. He was deported to Mexico in 2006.

After the accident, Salas received an emergency humanitarian parole visa to cross the border to access better medical care at the University of California, San Diego. While waiting, he suffered the first if two heart attacks, the second while en-route to San Diego, where he was pronounced brain dead. Salas was buried with military honors in a Reedley cemetery beside his younger brother, another fallen Marine.

In 2002, Hector Barajas was deported after pleading guilty to felony charges resulting from issues with alcohol and drugs. He founded the Deported Veterans Support House, known as the Bunker, a shelter for former U.S. military servicemembers who find themselves in the same situation. Last year, Barajas received a pardon from Gov. Jerry Brown, and recently became a U.S. citizen. Barajas though that Salas was headed in that direction as well.

Salas met other deported veterans through the Deported Veterans Support House. Like many of them, Salas learned that had he applied for citizenship anytime prior to his conviction, he could have received U.S. citizenship through his military service. But he was never given that information.