You are here: Home1 / Ron Acierno 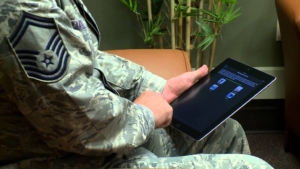 Telemedicine is the use of telecommunication and information technology to provide clinical health care from a distance. And now, veterans with Post Traumatic Stress Disorder (PTSD) who have difficulties making it to in-person therapy sessions may be able to get treatment that’s just as good via videoconference.

Telemedicine helps eliminate distance barriers and can improve access to medical services that would often not be consistently available in distant rural communities.

“We can now save the travel time and bring the treatment right to them,” said lead study author Ron Acierno, a psychologist and researcher with the Ralph H. Johnson VA Medical Center in Charleston, South Carolina.

The 127 men and five women who participated in the study were assessed with standard PTSD scales designed to measure symptom severity and depression. After being randomly assigned to two groups, each participant received 10 to 12 prolonged exposure therapy sessions, either at a VA medical center or at home by video conference, depending on their assigned group.

Those who received treatment at home used their own computers, tablets or smartphones. Equipment was provided to those participants who didn’t already own the necessary equipment.

The researchers repeated the PTSD scales in two- three months intervals. They found that at both time points, the vets who were treated at home showed similar improvements in PTSD symptom severity as those treated in the clinic.

The at-home treatment scores for depression were not as good at three months, but by six months they were similar to the scores of the group treated in the clinic.

Acierno said participants who dropped out reported difficulties such as feeling worried about losing control during exposures, the feeling they couldn’t tolerate assignments to go out in public and that imagined exposures made them feel bad.

To minimize this from happening in future treatments, Acierno is exploring the idea of pairing peers who have been through prolonged exposure therapy and no longer meet criteria for PTSD with veterans currently receiving the treatment via telehealth to help them through the difficult parts of the therapy.