You are here: Home1 / Richard Faler 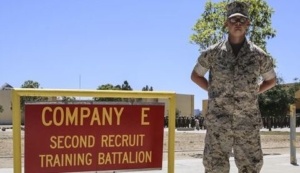 Pvt. Richard Faler is not one to take “no” for an answer. Although he weighed in at 305 pounds, his family had a long military history, and he wasn’t going to let his weight get in his way of serving his country.

So Faler began working out with his brother Christian, and the 21-year-old got his 5 feet 10 inch frame way down.

Now weighing 150 pounds, with boot camp behind him, Faler is on the road to becoming a defense message system specialist.

Despite his dramatic transformation, Faler said boot camp would’ve been a lot easier if he had been in better shape when he got there.

“Even though I, with the help of family and my recruiters, made the height-weight standards to ship to boot camp, I wish that I reached the fitness level of where I was midway through boot camp.

Growing up, Faler was active in several sports such as wrestling, baseball and soccer at West Central High School in Francesville, Indiana.

“My senior year of wrestling, I wrestled at 130 pounds,” said Faler. “After high school, I doubled my weight and then some.”

After high school, Faler got a job in a gas station.

Faler’s grandparents served in the Air Force and Navy and he had several cousins in the Army. He made up his mind that he would join what he calls the “hardest” service: the Marine Corps.

Christian got his brother on a daily running routine, starting with the block around his house. They gradually increased the distance, and in just one year, he had shed 80 pounds.

Faler was in the Delayed Entry Program, but the physical training plan he received from his recruiter nearly made Faler give up.

“I could barely do any of it,” Faler said. “At that point, I lost motivation when I realized after all that work I couldn’t do anything.”

But Christian pushed, offering to join the Marine Corps, too, if his brother could meet the standards.

Faler changed his eating habits, adding chicken and vegetables that were low in fat and high in protein.”

Faler said he never could’ve met his goals without his brother and recruiters motivating him along the way.

“A lot of people told me I couldn’t do it,” Faler said. “Just proving them wrong was the best feeling.”