Tag Archive for: Rex A. Spitler 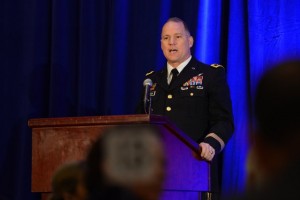 Upon entering the military, a soldier becomes a highly-trained individual prepared to face any situation on the battlefield and beyond.  Recently, Maj. Gen. Rex A. Spitler spoke at an American Legion National Credentialing Summit identifying that the Army should take measures to help soldiers be recognized for their skill sets upon re-entering the civilian marketplace.

As deputy chief of staff for the Army Training and Doctrine Command (TRADOC), Spitler sees 500,000 individuals process through his facility each year, knowing that the value each soldier carries from their military training is a great asset to the civilian world. Therefore, upon leaving the military, soldiers should be armed with credentials that provide them with a foothold in their civilian careers.

The Army trains its members to engage in the complex world, where the next battle is “unknown and unknowable,” Spitler said. “We’re not quite sure what we’re going to see when we go into that next battle.”

Spitler cited the Army’s Soldier for Life program as an example, that once a person enters the Army, they are truly serving their whole life in that their impact in their community and beyond after active duty is a reflection of the person they became because of the military.

The two-day American Legion summit was comprised of Veterans, government officials and members of all the services.

“The conference highlighted the importance of creating a skilled workforce that not only strengthens the military in these challenging times, but also helps the military member,”  said Steve Gonzalez, Assistant Director, Veterans’ employment and education division at the American Legion. The focus was to assure that the Army maintains professional industry best practices, providing the military with the highest caliber of personnel.  Those serving in the military should find out now what opportunities for credentialing are available to them, so that they can make the best use of the education and training available, to benefit them now and beyond their military careers.

Spitler also stated, “We’re training them how to survive and win in any environment that they’re engaged in, which also includes the civilian marketplace.”