You are here: Home / Reserve Component 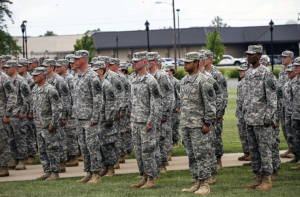 Since the founding of our Republic, the citizen soldier has been ready, on-call to leave home and protect our nation. Although the United States has the greatest standing military force in the world today, that force cannot accomplish its mission of protecting liberty without the support and augmentation of our Reserve Component (RC) whether from the Army or Air National Guard or from the Army, Navy, Marine, Air Force, or Coast Guard Reserve.

These Guard and Reserve troops comprise about half of our fighting forces. When citizen soldiers leave their families and civilian employment to protect our liberty, we have an obligation to them to protect their legal rights.

The Uniformed Services Employment and Reemployment Rights Act, also known as USERRA, is a Federal law that establishes rights and responsibilities for uniformed servicemembers and their civilian employers. It ensures that the RC are not disadvantaged in their civilian careers because of their service; (2) are promptly reemployed in their civilian jobs upon their return from duty; and (3) are not discriminated against in employment based on past, present, or future military service.

Employer Support of the Guard and Reserve (ESGR) informs and educates servicemembers and their civilian employers regarding their rights and responsibilities governed by USERRA. ESGR does not enforce USERRA, but serves as a neutral, free resource for employers and servicemembers.

It is up to Congress to update USERRA to reflect the increased training commitments of today’s force, and consider additional tax benefits such as deductions for hiring reservists and tax exemptions for “differential pay.”

Although USERRA compliance is the law, these efforts to reward employers who go above and beyond current requirements would be of great benefit to our RC. If you are an employer and would like to sign a statement of support, please contact  Debbie Gregory at info@localhost , and in my capacity as Director of Employer Engagement, for California ESGR, I will be happy to arrange a signing ceremony.