You are here: Home1 / Operation SHUFLY 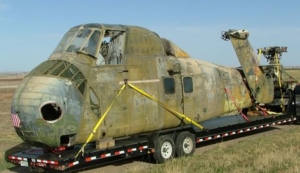 Bob Fritzler, now 82, served in the U.S. Marine Corps for 11 years. In Vietnam, he flew a Sikorsky H-34 helicopter during Operation SHUFLY, a Marine helicopter operation that primarily ferried troops in Vietnam between 1962 and 1965.

In 1962, Fritzler was a Marine aviator flying a H-34 Choctaw helicopter to support the South Vietnamese military as they battled the Viet Cong forces. At first he operated down south below Saigon then his unit relocated up to the DaNang area.

Today, his mission is to restore the H-34 that sits on his property in a large garage. His eventual goal is to have it in the Smithsonian Museum in Washington D.C

The Keenesburg, CO resident paid homage to the helicopter, saying it was a huge game changer for the Marines. Pilots could now drop soldiers off anywhere instead of relying on ships.

Fritzler came by the big bird after attending a Marine reunion where he met Gerald Hail, who restored old planes back to flyable conditions. Hail invited Fritzler out to fly, and that’s where Fritzler noticed his H-34, the one he had flown eight combat missions in.

Even though most of the paint was gone and Fritzler’s old squadron number had been painted over with a different squadron’s number, he still recognized the helicopter as the one he flew.

“I had a real love affair with it,” Fritzler said.

Hail agreed to transfer the helicopter to Fritzler as long as Fritzler was willing to put in the work to fix it up.

Fritzler’s restoration project has already taken him a few years, but it’s a lengthy process. He has purchased two other helicopters for parts.

Even though his flying days are over, this may be the next best thing.