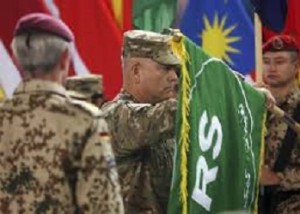 December 28, 2014 could very well be a date on history tests for students in the future.  On that date, the U.S. formally ended its war-time operations in Afghanistan, transferring the country’s security to Afghan security forces.

American military combat operations for the war in Afghanistan, officially named Operation Enduring Freedom (OEF) by the U.S. government, began on October 7, 2001. Combat operations lasted 13 years, 2 months and 21 days, making it the longest war in the history of the U.S. military.

President Obama issued the following statement, thanking service members and honoring the sacrifice of the 2,350 military personnel who lost their lives:

“Today’s ceremony in Kabul marks a milestone for our country. For more than 13 years, ever since nearly 3,000 innocent lives were taken from us on 9/11, our nation has been at war in Afghanistan. Now, thanks to the extraordinary sacrifices of our men and women in uniform, our combat mission in Afghanistan is ending, and the longest war in American history is coming to a responsible conclusion.

On this day we give thanks to our troops and intelligence personnel who have been relentless against the terrorists responsible for 9/11–devastating the core al Qaeda leadership, delivering justice to Osama bin Laden, disrupting terrorist plots and saving countless American lives. We are safer, and our nation is more secure, because of their service. At the same time, our courageous military and diplomatic personnel in Afghanistan–along with our NATO allies and coalition partners–have helped the Afghan people reclaim their communities, take the lead for their own security, hold historic elections and complete the first democratic transfer of power in their country’s history.

We honor the profound sacrifices that have made this progress possible. We salute every American–military and civilian, including our dedicated diplomats and development workers–who have served in Afghanistan, many on multiple tours, just as their families have sacrificed at home. We pledge to give our many wounded warriors, with wounds seen and unseen, the world-class care and treatment they have earned. Most of all, we remember the more than 2,200 American patriots who made the ultimate sacrifice in Afghanistan, and we pledge to stand with their Gold Star families who need the everlasting love and support of a grateful nation.

Afghanistan remains a dangerous place, and the Afghan people and their security forces continue to make tremendous sacrifices in defense of their country. At the invitation of the Afghan government, and to preserve the gains we have made together, the United States–along with our allies and partners–will maintain a limited military presence in Afghanistan to train, advise and assist Afghan forces and to conduct counterterrorism operations against the remnants of al Qaeda. Our personnel will continue to face risks, but this reflects the enduring commitment of the United States to the Afghan people and to a united, secure and sovereign Afghanistan that is never again used as a source of attacks against our nation.

These past 13 years have tested our nation and our military. But compared to the nearly 180,000 American troops in Iraq and Afghanistan when I took office, we now have fewer than 15,000 in those countries. Some 90 percent of our troops are home. Our military remains the finest in the world, and we will remain vigilant against terrorist attacks and in defense of the freedoms and values we hold dear. And with growing prosperity here at home, we enter a new year with new confidence, indebted to our fellow Americans in uniform who keep us safe and free.”

While active combat operations have now ceased, the U.S. is not yet completely done in Afghanistan. Approximately 9,800 U.S. service members will remain in Afghanistan through 2015, as part of a N.A.T.O. force of approximately 13,500. 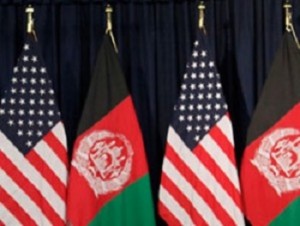 On September 30, 2014, representatives from Afghanistan and the United States signed a new security agreement, allowing American ground forces to remain in the country after the end of this year.

Afghanistan’s newly elected president, Ashraf Ghani, made the signing of an extended security agreement with the U.S. one of his campaign promises. On the day after his inauguration, Ghani made good on his promise and the bilateral agreement was signed by Afghanistan’s National Security Advisor Hanif Atmar and U.S. Ambassador James Cunningham. The signing was televised from the presidential palace.

“As an independent country … we signed this agreement for stability, goodwill, and prosperity of the our people, stability of the region and the world,” Ghani said in a speech after the signing.

In his speech, Ghani also said that the agreement did not compromise Afghanistan’s sovereignty, and that either side has the right to withdraw from the pact within two years.

The same day, a similar agreement between Afghanistan and NATO was ratified to allow the alliance’s European members to contribute to a residual foreign force.

The agreement permits a foreign force of 12,000 military personnel to stay after the end of 2014, when the combat mission of Afghanistan’s U.S.-led NATO force ends.

Some 9,800 U.S. troops are expected to make up the bulk of the force, with the remainder coming from other NATO members. The force will train and assist Afghan security forces in the on-going war against the Taliban and its radical Islamist allies within Afghanistan.

Under the pact, the U.S. has the right to keep bases in Afghanistan as long as the security agreement is in force. In return, the U.S. Military will raise funds to train and equip the Afghan security forces, which now number 350,000.

Hopefully, the security agreement will prevent what is happening in Iraq from happening in Afghanistan. After the U.S. pulled all of its forces from Iraq in December 2011, insurgent groups, most notably al-Qaeda and the Islamic State, have been able to overrun Iraq’s security forces. The Islamic State has amassed huge parcels of land in both Iraq and Syria. Many American Veterans who fought in Iraq feel that the current instability in that country could have been prevented had the U.S. left ground forces in Iraq.