Tag Archive for: open to women

You are here: Home1 / open to women 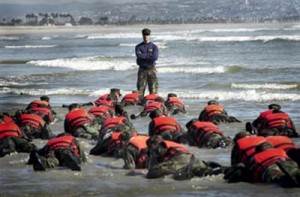 Navy SEALs training may soon be open to women.

If orders come from Navy officials, the academy could open the screening test to women as soon as this spring.

With Defense Secretary Ash Carter announcement that all military positions will open to women, all Navy service assignments will be open to female midshipmen.

At the Naval Academy, officials said Monday they were awaiting orders on how to meet Carter’s mandate. At earliest, the Class of 2017 could send the first women to SEALs training, according to Col. Stephen Liszewski, the commandant of midshipmen.

“We will ultimately respond to the timeline that’s established,” he said. “There has always been interest from the female members of the brigade.”

With SEALs assignments being highly competitive, Academy officials routinely send very few midshipmen to SEALs training. The final numbers depend on the needs of the Navy.

Prior to earning their spots, these midshipmen must take the academy’s screening test. Although officials declined to describe the requirements, they did say that the test is a “24-hour physical and mental exercise, which includes both team and individual physical activities and assessments.”

The approximately 60 midshipmen who pass the screening are sent to a three-week evaluation at the Naval Special Warfare Command, in Coronado, California. About half of them are approved to enter SEALs training upon graduating from the academy. The notoriously difficult SEALs school is known as BUD/S, Basic Underwater Demolition training.

The Naval Academy’s male graduates maintain about a 90 percent success rate, Carter said. Meanwhile, some 80 percent of outside candidates fail the training, he said.