You are here: Home / Next Generation Tactical Wearable Night Vision 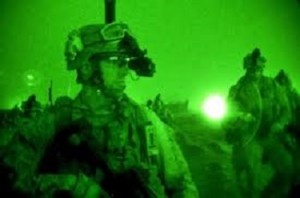 In our ever changing world, the U.S. military has managed to maintain its status as a global leader in innovating and perfecting new technologies. For years, this innovation was referred to as “American know-how” and was a prime reason why the U.S. was on the winning side of two world wars.

As a continuation of this history of innovation, the Defense Advanced Research Projects Agency (DARPA) is currently seeking proposals for the “Next Generation Tactical Wearable Night Vision.” DARPA, the agency of the Department of Defense responsible for developing new technologies, is interested in developing night vision technology that is lighter than current goggles and monocles, while offering wearers more use of the infrared spectrum. DARPA is also looking for the capability of digitally sharing the wearer’s view with other unit members and command/control centers.

The night vision gear currently issued to the U.S. military uses technology that is essentially decades old. DARPA believes that newer technology is available to develop night vision gear that will allow users to see better at night, with less strain on their necks. While the current gear is not exceptionally heavy, there has been a link established between neck strains, pinched nerves and other injuries from prolonged use of current night vision goggles and monocles.

DARPA is requesting gear that offers 20/20 vision “at clear starlight” and weighs less than current gear, all the while keeping existing durability standards.  The new system will also have to function for a minimum of 24 hours on a full charge, be able to switch in and out of night vision mode instantaneously, and have the ability to stream video.

DARPA wants the “Next Generation Tactical Wearable Night Vision” to possess the capability to “support interface with tactical computing elements and communication systems, to include the transmission of sound and video to other team members.” Equipping personnel in the field with night vision of this caliber would provide better intelligence. Ideally, DARPA would want the night vision gear to interface with nearly-universal devices such as smartphones or tablets.

The period for open submissions for “Next Generation Tactical Wearable Night Vision” will end on October 22, 2014.