You are here: Home / Military Blog / New Secretary of Defense 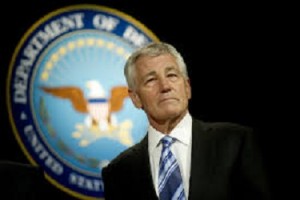 On Monday, November 24, 2014, Chuck Hagel resigned as Defense Secretary. Hagel has been serving as the nation’s second highest military official, after the commander-in-chief, since February 27, 2013.

Over the past two years, Secretary Hagel helped steer the United States Armed Forces through a period of transition, including the drawdown in Afghanistan, as well as through tough fiscal decisions. It has been reported that sometime in October, Hagel began speaking with President Obama about his resignation.

Numerous media outlets have suggested that the president forced Hagel to resign. The Monday morning media hype was full of reports that the White House lost confidence in Hagel’s ability to carry out his role at the Pentagon.

Secretary Hagel was brought in to the position to wind down the wars in Iraq and Afghanistan, and to help restructure the U.S. military to a peace time force size. With the rise of the Islamic State (IS) in Iraq and Syria, the needs of the U.S. military are changing, and a different type of leadership, other than what Mr. Hagel can provide, seems to be necessary.

In a statement at the White House, President Obama announced the resignation of Chuck Hagel as Defense Secretary. Despite reports of their differences, the president had nothing but kind words to say about Hagel.

“When it’s mattered most behind closed doors, in the Oval Office, you’ve always given it to me straight. For that, I will always be grateful,” President Obama said.

Hagel called serving as Secretary of Defense “the greatest privilege of my life.”

Hagel is a former Senator from Nebraska, and the only enlisted combat Veteran to become Secretary of Defense. Hagel served in the U.S. Army as an Infantry Squad leader. He was deployed to Vietnam in 1967-68 with the 9th Infantry Division. Hagel is the recipient of the Vietnamese Cross of Gallantry, two Purple Hearts, an Army Commendation Medal and the Combat Infantryman Badge.