You are here: Home1 / Navy vet 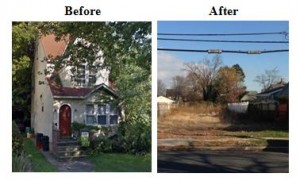 When Philip Williams traveled from Long Island to Florida for a knee replacement, he never could have anticipated the perfect storm that would claim all of his possessions.

The 69-year-old Navy veteran came back to an empty lot, where his lifelong home once stood.

Williams’ home had been demolished in the spring by town officials. He had spent six months recuperating from surgical complications in Fort Lauderdale. In the meantime, officials in the Town of Hempstead deemed his home unfit for habitation. Then they knocked it down.

“It’s just wrong on so many levels,” Williams said “My mortgage was up to date, my property taxes were up to date … everything was current and fine.”

Williams went to Florida last December so that a friend could help with his recovery. But he developed post-op infections that required him to have further surgery. He also had cardiac complications, and he was unable to return home until he was medically cleared to return home in August.

The house had first been brought to Hempstead officials’ attention when neighbors complained that the residence, built in the 1920s, was in disrepair and a blight on the neighborhood. Inspectors then determined the house was a ‘dilapidated dwelling’ and it was knocked down.

Williams, who had lived in the house from the age of six months old says he was never contacted.

“The town basically took everything from me,” said Williams, who is now staying with a friend in Florida. “The town does not have a right to take all of my property, all of my possessions.”

Now, everything Williams owns fits in two suitcases. He lost invaluable belongings, including his late wife’s engagement ring, photos of his six children growing up and a model train set he had since he was a child. He lost all of his clothing, a bicycle he’d just purchased, dishes, silverware and other housewares.

Williams has retained Attorney Bradley Siegel as he prepares to seek reimbursement for the house and all the lost belongings.

The town said in a statement that it “followed all proper procedure with regard to property owner notification.” But town officials refused to answer any other questions, citing pending litigation.

Do you think the Town of Hempstead did everything it could have to prevent this unfortunate incident?