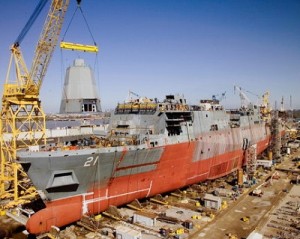 Whether it’s to protect shipping lanes, provide humanitarian aid following a catastrophe, **or** supporting our interests and our allies in conflict, our Navy functions to be positioned where it matters, when it matters, anywhere around the world. Like the advertisements say, the U.S. Navy is “a global force for good.”

Keeping up a global presence for the world’s finest Navy is an expensive venture. Maintaining technologically relevant and operation-ready ships is a constant task, and an unceasing expenditure. The Navy’s recent release of its Report to Congress on the Annual Long-Range Plan for Construction of Naval Vessels for FY2015, commonly referred to as the Navy’s 30-year Shipbuilding Plan, shows that the branch will not meet its shipbuilding needs with current funding.

The Navy’s shipbuilding budget has averaged approximately $13 billion/year. According to the report, prepared by the office of the Chief of Naval Operations, the Navy won’t be able to sustain the building of new ships between the years of 2025-2034, with the current amount of funding.

The report outlines challenges that the Navy will face when attempting to increase its fleet from 289 to 306 vessels. The bulk of the increased ships will come from the eventual building of twelve new Ohio-class submarines. There are also two more Gerald R. Ford-class aircraft carriers, one more America-class amphibious assault ship, and several more Freedom-class and Independence-class littoral combat ships. And of course, some current ships will be decommissioned in the process as well.

The Navy estimates that the average cost during the period between FY2025-2034, when the service will be spending the most, will be $19.7 billion a year. This includes the estimated $24 billion per year in FY2032, when building is expected to be at its peak.

The report found that even if the Ohio-class building project was completely removed from the Navy’s shipbuilding plan, the costs for maintaining and replenishing their fleet would still be over $15 billion per year, starting in 2020.

While immediate projects are not affected, Congress and the Department of the Navy need to figure out a workable budget sooner rather than later, one that doesn’t involve cutting everything. Maintaining a progressive Navy is critical to U.S. military success, and to the American way of life.