You are here: Home1 / Navy Cross 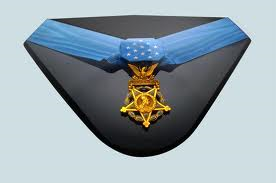 Secretary of the Navy Ray Mabus is recommending that two service members, either Sailors or Marines, be upgraded to the Medal of Honor following an extensive review of medals awarded since Sept. 11, 2001. The names of the two service members were not made public.

To end his near-record seven-and-a-half year tenure, Mabus has made the recommendations as part of a Defense Department review of all service crosses and Silver Stars awarded to troops to determine if any of them are eligible for upgrade.

Some 1,100 combat awards meet those criteria.

Among those being considered for the upgrade are: Navy Cross recipient Marine Sgt. Rafael Peralta, who posthumously received the award in 2008 for throwing himself on a grenade in Fallujah to save the lives of fellow Marines during a 2004 battle; Navy Cross recipients Cpl. Jonathan Yale and Lance Cpl. Jordan Haerter, who sacrificed their lives to keep a truck loaded with explosives from entering the base they were guarding in Ramadi, Iraq in 2008; and Navy Cross recipient Lance Cpl. Brady Gustafson, who courageously engaged enemy fighters as a turret gunner in Afghanistan in 2008 despite sustaining grievous wounds to his leg.

Chief Petty Officer Nicolas Checque, a member of Naval Special Warfare Development Group, was posthumously awarded the Navy Cross for his actions during a December 2012 raid in Afghanistan to rescue an American doctor, Dilip Joseph, who had been captured by the Taliban. Senior Chief Petty Officer Edward Byers Jr., another member of the team, received the Medal of Honor for his heroism in subduing the Taliban captors and rescuing Joseph.

Nearly seven years after the award was approved, the family of fallen Marine Sgt. Rafael Peralta has accepted his Navy Cross. But the family will only hold onto it temporarily, as they intend to donate it to the Navy destroyer Rafael Peralta for its October 31st christening

On November 15, 2004, Sgt. Peralta absorbed a grenade blast during a building-clearing mission in Fallujah, Iraq. He had already been shot multiple times by an AK-47, when insurgents threw a hand grenade in the room where Peralta and two additional Marines were. According to his 2008 Navy Cross citation, Peralta pulled the enemy grenade to his body to protect his fellow Marines.

Although his superiors put him in for the Medal of Honor, a succession of defense secretaries determined that the evidence of Peralta’s heroism wasn’t conclusive enough to meet the high standard for military’s highest award for valor. Additionally, there have been conflicting stories of the events of that day.

Peralta’s family resisted receipt of his Navy Cross, insisting he earned the Medal of Honor.

Peralta’s sister, Icelda Peralta-Donald, said the family had a change of heart last October during the keel-laying ceremony for the Rafael Peralta. Navy officials told Peralta’s mother, Rosa, that it was traditional for the family to donate a personal item for the ship in honor of its namesake.

Peralta-Donald said that her mother now feels that her son’s Navy Cross will keep all the crew members safe.

Peralta-Donald said the family’s decision to accept the Navy Cross was not a concession or an indication that they would stop pursuing a higher award.

“Deep in our hearts we still believe somebody will do the right thing and upgrade to the Medal of Honor,” she said.

Defense Secretary Ash Carter has never been asked to consider the Peralta case, so there remains the possibility of a new review in coming years.