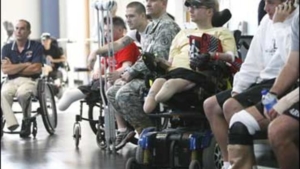 Veterans who had to medically retire from the military because of combat-related injuries during the last two decades have lost out on thousands of dollars in severance pay because the Defense Department improperly taxed those payments.

And for some veterans of these veterans who were shortchanged millions by the government, it took an act of Congress to finally get the money they were owed.

Luckily, the nonprofit National Veterans Legal Services Program stepped up to go to bat for these disabled American veterans.

“It literally takes an act of Congress to try to right this historic wrong that was done to them,” said Thomas Moore, a lawyer with the National Veterans Legal Services Program.

“We have estimated that it’s about 14,000 veterans, and the total amount taken from these veterans we’ve estimated as about $78 million,” Moore said.

Both houses of Congress unanimously passed H.R. 5015, the Combat-Injured Veterans Tax Fairness Act of 2016, before Congress wrapped up its legislative session. Once the bill is signed into law, the veterans will be allowed to file an amended tax return to get their money.

Sen. Warner said he takes comfort knowing the bill is heading to the president’s desk to be signed into law.

“It is unbelievable that Congress needed to act to clear up this issue,” Warner said.