Tag Archive for: Musings of a Navy Seal Wife

You are here: Home / Musings of a Navy Seal Wife 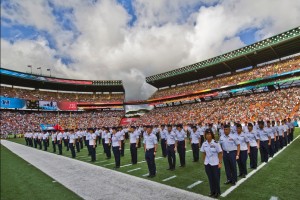 In her column, Musings of a Navy Seal Wife, MilitaryConnection.com blog contributor, Liz Brown, recently wrote a piece regarding taxpayer money being used to honor our military at sporting events. We were appalled to hear that wealthy sports teams were using tax payer money and then reaping the benefit of the “goodwill.” Honoring U.S. troops at National Football League games should be done out of a sense of patriotism, not a quest for profit.

Now, the Senate has voted to block the Defense Department from allowing this practice to continue.

Sen. John McCain (R-Ariz.) sponsored the amendment, along with Sens. Jeff Flake (R-Ariz.) and Richard Blumenthal (D-Conn.), which passed by unanimous consent. The legislation comes on the heels of reports that the Pentagon spent millions of dollars to NFL teams to honor the troops during games.

Referring to the practice as “patriotism for profit,” McCain stated that NFL teams have received nearly $7 million in taxpayer dollars over the past three years from Army National Guard contracts, which included publicly honoring troops.

A search of the government’s USASpending.gov website shows this practice has been going on far longer than three years. The Pentagon paid the Atlanta Falcons more than $1.1 million dollars since 2010 and paid the Baltimore Ravens more than $1.2 million since 2009.

McCain said that he was shocked and disappointed to learn that several NFL teams weren’t sponsoring these activities out of the goodness of their own hearts, but were doing it to make an extra buck.

NFL spokesman Brian McCarthy said that the proposed amendment “paints a completely distorted picture of the relationship between NFL teams and our military.” He continued, “We agree that no one should be paid to honor our troops. Military spending on recruiting efforts should not be confused with programs that support our nation’s active military and veterans. The NFL’s long history of honoring and supporting our troops will continue because it is the right thing to do.”

Shame on the NFL: Military Connection: by Debbie Gregory